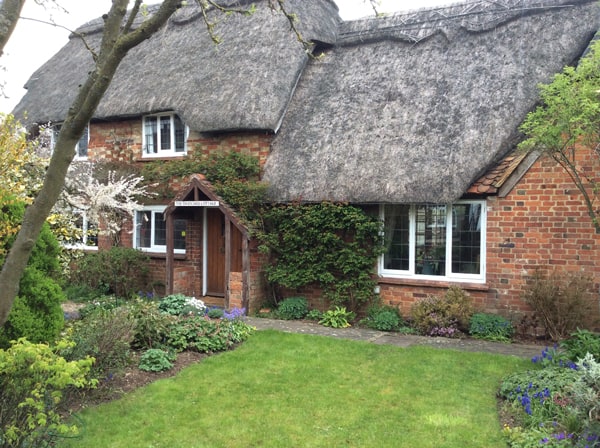 This delightful thatched cottage at number 88 High Street North was once standing in the grounds of Stewkley House. It was formerly a derelict farm labourer’s cottage with an adjoining Dutch barn and was restored under the direction of Miss Monica Michell. She loved cats and her home was adorned by over 350 cat related items. Everyone in the village came to know her simply as the Cat Woman. She is buried in our Churchyard under a headstone with two cats perching on it!

Miss Monica Mary Michell, ‘The Cat Woman of Stewkley’, was born in Worthing in 1908 to Sybil and Guy Michell, who was a brewer who owned the West Street Brewery in Horsham which had been founded in 1835 by Henry Michell, his grandfather. It was sold to the Rock Brewery of Brighton in 1912 along with 25 tied houses and was subsequently closed. Monica’s mother died in 1917, her father remarried and two more children were born.

At the outbreak of WW2 she was staying at the Green Park Hotel in Harrogate where it is recorded that she had ‘private means’.

By the 1950s, she was frequently seen in the company of Sir Basil Richard Gilzean Tangye, a wealthy Midlands industrialist from Edgbaston. Photographs appeared in the Society pages of publications including Tatler, from events such as the Ascot Races in 1953 and annually at the Cresta Run Dinner held at The Dorchester in London which seemed to be a mutual interest.

During the early 1950s, she went into partnership with Sir Basil who bought the seven-bedroom Stewkley House which they converted into a Hotel to cater for a select clientele who came from London to participate in country pursuits.

Miss Michell lived in the next-door cottage which F William Grace renovated extensively under her watchful eye. She was mainly known for her love of cats, especially Abyssinians with which it was said, she sometimes shared her bath! She decorated the cottage in her own idiosyncratic way, cat-themed throughout; as many as 20 or more cats being resident at any one time. In addition she possessed a number of original paintings by the famous prolific cat artist Louis Wain but rumour has it that these mysteriously later disappeared.

She also proved very popular with the village children as at Christmas time she would mount a huge rooftop tableau of Santa Claus and his reindeer. Such a display is fairly common in 21st century Britain, but was virtually unknown in an austere post-war village.

During the 1970s, Miss Michell was also involved in the ultimately successful campaign against siting London’s third airport at Cublington which would have resulted in the complete obliteration of Stewkley. She penned and published a heartfelt poem which was written from the point of view of her cats, unsurprisingly.

Sir Basil Tangye died in 1969 aged 74 followed in 1984 by Miss Michell, aged 76. They are both commemorated in Stewkley churchyard on her gravestone, which is adorned with two carved stone cats.

This song is part of the Stewkley Songbook, which features songs relating to various events in the long history of the village of Stewkley, Buckinghamshire, UK.

At the turn of the century, Louis Wain became a household name as ‘The Man Who Drew Cats’. His drawings of cats appeared in periodicals and his own annuals and then, increasingly on prints and postcards. While his early work was already distinctive, in a gently humorous way, the onset of schizophrenia gradually transformed his style, making it bright, highly patterned and apparently in keeping with Jazz Age Modernism. 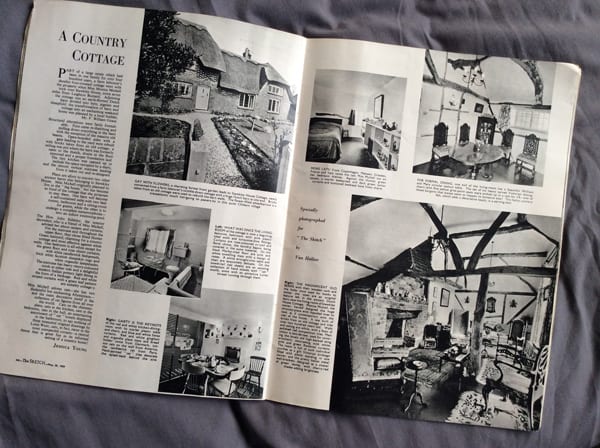 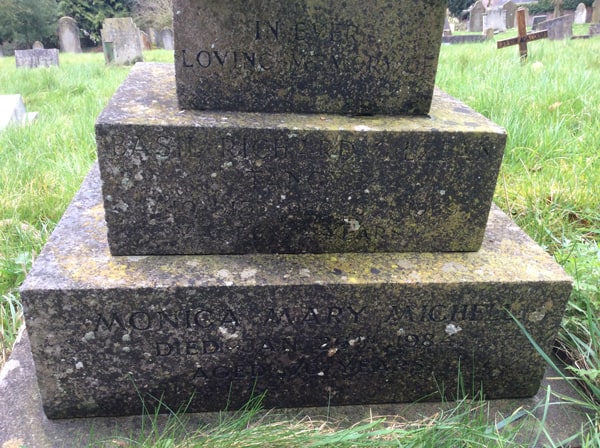 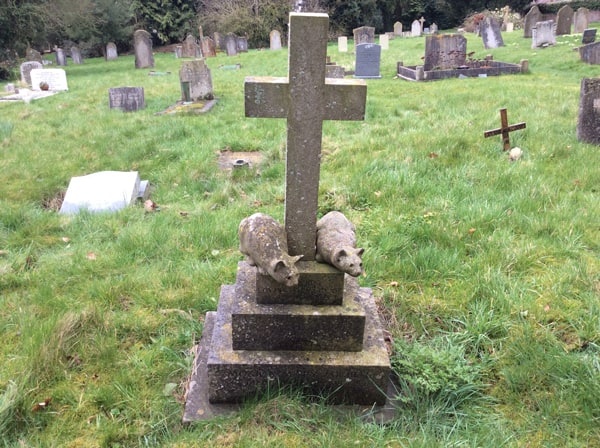 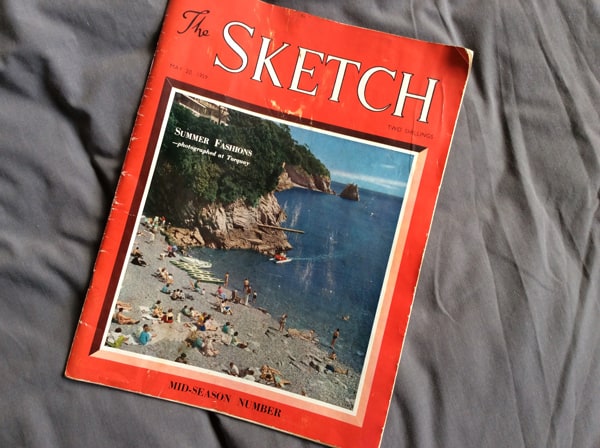 Once standing in the grounds of Stewkley House this idyllic thatched cottage was lovingly restored by F William Grace, a local builder under the careful attention of Miss Monica Michell. She was the partner of Sir Basil Tangye, the then owner of Stewkley House. When he bought the house, which had been in the ownership of just one family for over 400 years, there was a large estate with it. This farm labourers’ derelict 4 roomed cottage, together with an adjoining earth floored Dutch barn divided into byre, pigsties and sheepfold, needed extensive rebuilding. This work took place in the early 1950’s when Sir Basil had opened up Stewkley House as a beautiful country retreat hotel.

Miss Michell as villagers came to know her, adored cats, owning two “disdainful but enchanting Abyssinians”. This breed of cat particularly liked water and it was common village knowledge that the cats sometimes shared a bath with Miss Michell. But as an avid collector of cat items, in wood, china, stone and painted form, she used cats as the main decorative motif in the renovation project. Cats on the chimneypiece, cats in the kitchen, cats in the bedrooms, cats in the hall, an entertaining assortment of cat towels displayed in the bathroom, to say nothing of three treasured original cat drawings by Louis Wain. In fact over 350 cat related items adorned her cottage.
She died at the age of 76 and as perhaps one would expect, even her gravestone in the churchyard features two stone carved cats.

The children of the time remember her fondly as ‘the cat woman’ and each Christmas she had a large Father Christmas with his Sleigh and Reindeer arranged on the roof of the thatched cottage. It was to be an attractive annual tableau for many years which left a fond lasting impression on the children of Stewkley.

At the turn of the century, Louis Wain became a household name as ‘The Man Who Drew Cats’. His drawings of cats appeared in periodicals and his own annuals and then, increasingly on prints and postcards. While his early work was already distinctive, in a gently humorous way, the onset of schizophrenia gradually transformed his style, making it bright, highly patterned and apparently in keeping with Jazz Age Modernism.

Louis Wain was born in London on 5 August 1860. His father was a textile salesman and his mother designed carpets and church fabrics. A sickly child, he was educated at the Orchard Street Boys and Infant School, South Hackney, and at St Joseph’s Academy, Kennington.

He trained at the West London School of Art (1877-80), remaining there as an assistant master until 1882. From his father’s death in 1880, he had to support first his mother and five younger sisters and soon after a sick wife. He supplemented his income by working as a freelance illustrator (initially influenced by Caldecott and May), and in 1882 he joined the staff of the Illustrated Sporting and Dramatic News. He began to make his name with humorous cat drawings, primarily in the Illustrated London News, the staff of which he joined in 1886.

He was the first to work consistently within the convention of depicting clothed and standing animals. His anthropomorphic vision of the world soon brought him much fame and as a result he was elected President of the National Cat Club in 1891. However, he was not a good businessman, and in 1907 he may have been sued for debt. In the same year, he moved to the United States to make a new start, producing strip cartoons for the New York American (1907-10).

Back in England, he experimented with animation in 1917, in the films, The Golfing Cat and The Hunter and the Dog. After the death of his sister Caroline in the same year, he began to suffer a mental decline, becoming a schizophrenic, as his work clearly revealed. ‘His cats became frenzied and jagged, sometimes disappearing into kaleidoscopic shapes’ (Frances Spalding). When, in 1925, he was found in the paupers’ ward of Middlesex County Asylum, an appeal was launched on his behalf, and he was transferred to a comfortable room with his paints in the Bethlehem Royal Hospital, Southwark. The appeal reached twice the target sum in a month, a sign of the public’s continuing affection. He died in the Middlesex County Asylum, Napsbury, near St Albans, on 4 July 1939.