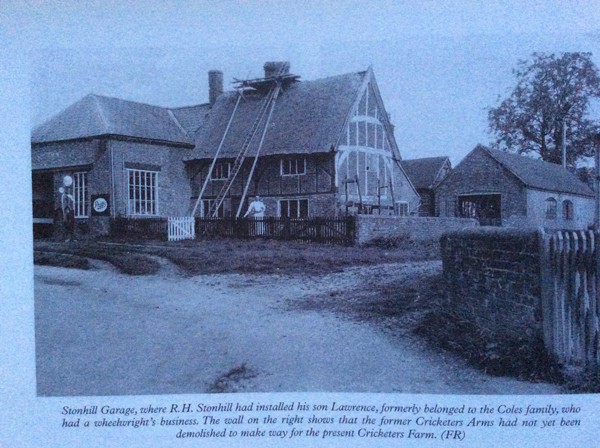 This property at number 78 High Street North was formerly a coachworks run by the Coles Family. The Stonhills took over the business and when horse drawn vehicles gave way to motorised ones the premises changed to being a garage to repair motor vehicles and serve petrol. Today the property has been renovated into a domestic dwelling.

Number 76 High Street North is the former site of one of Stewkley’s ten public houses, The Cricketers Arms. It was demolished in the late 1960’s and this bungalow you see before was built in its place.

The left hand part of this building was formerly a coachworks run by the Coles family, who would build any type of vehicle, from a farm cart to a carriage for the local gentry.

The Stonhills took over the business from the Coles family and as horse drawn vehicles gave way to motorised ones the premises changed to being a petrol station and repair garage. This business continued to the end of the 20th Century.

To the right of Stonhill house is number 76 Cricketers Farm. The ‘Cricketers Arms’ Pub used to stand alongside the footpath. It was demolished in the late 1960’s and replaced by the present bungalow. The last occupant of the old building was ‘Shrimp Hordern’, brother of the famous actor Sir Michael Hordern. Shrimp kept pigs at Cricketers Farm and was well known locally as nearly always being barefoot!