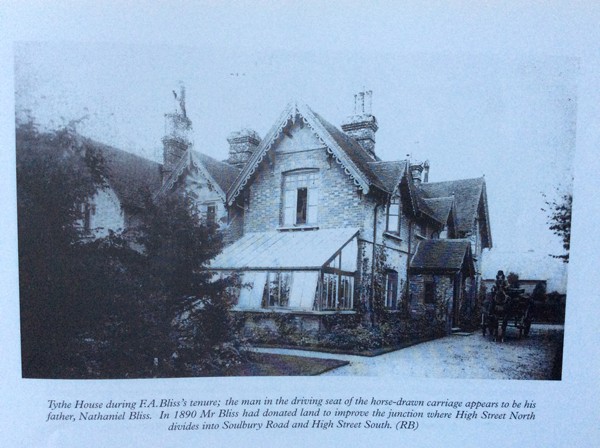 Tythe House is one of the most historically interesting houses in the village. Originally built on the site of Tythe Farm, which was owned by the Church, the property has undergone extensive additions over the intervening years from past owners like Lord Orkney. In its extensive grounds is an historically significant Medieval Moat, dating back to Saxon times. Colourful characters have lived here and have stories to tell… 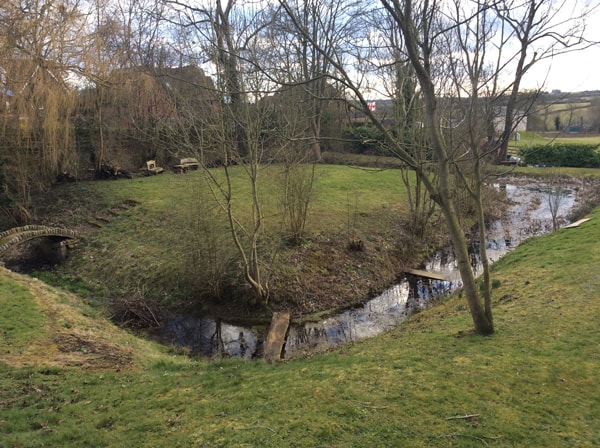 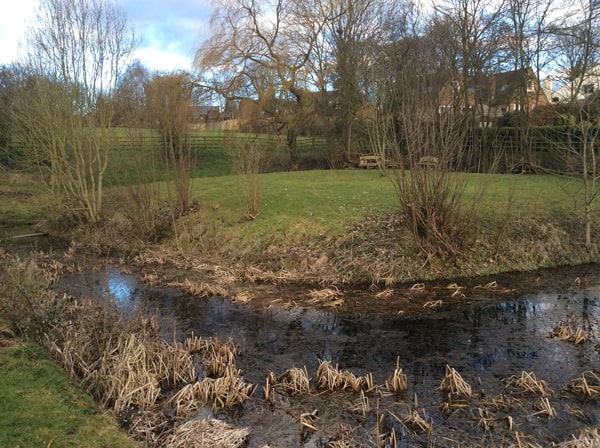 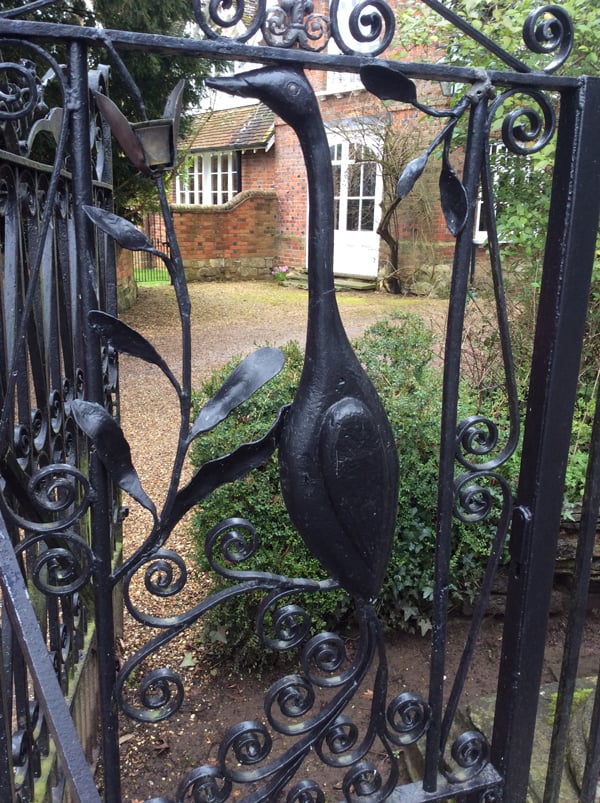 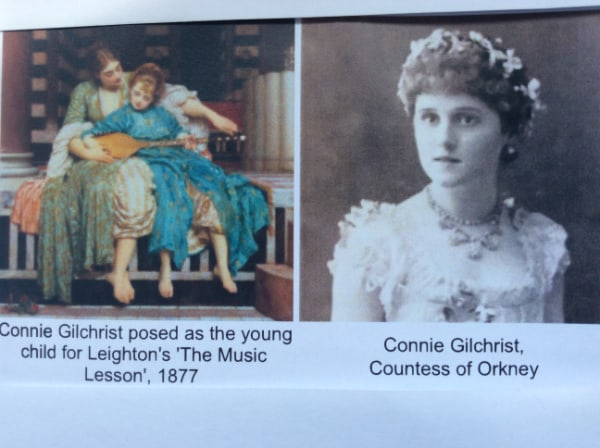 Tythe House originated from a farm which belonged to the Church. The manager of the farm paid rent or ‘a tythe’ to the Church and so this gave rise to it’s name. This tythe was traditionally paid in produce, such as wool, hay or other crops. The ancient site of the farm is at the centre of the village and includes an historically significant mediaeval moat.

The present house was built on the site of Tythe Farm in late Victorian times. FA Bliss lived in Tythe House in the 1890’s. In 1890 Mr Bliss donated land to improve the junction where High Street North divides into Soulbury Road and High Street South, so creating the road layout you see here today.

He also owned the row of cottages opposite his front gates, and not surprsingly these are called Bliss’s cottages. The Bliss family were joint owners, with the Hedges family, of two local brickyards in Dunton Road which made not only roof tiles and drainpipes, but also some of the famous Stewkley bricks. As a testament to their longevity, there are still a number of houses surviving in the village made out of the original Stewkley brick.

Later the London Brick company at Newton Longville used mechanised methods which mass produced bricks and so proved too competitive for the surrounding small village brickyards. Consequently, the village brickyards were forced to close in 1939. The Bliss’s also owned two smithies in the village.

By 1907 Tythe House had been acquired by the 7th Earl of Orkney. He virtually rebuilt it, using Rothschild money, adding substantially to the original building and renovating the extensive gardens. He rebuilt the old Saxon Moat and added a fourth side to the original 3 sides.

Lord Orkney was a larger than life character in our village and he was known to one and all as “lordy”. He was chairman of Stewkley Parish Council, sat on a number of village committees and oversaw many good changes for village life in Stewkley. These included the construction of the Village Hall, the dedication of the War Memorial and the establishment of the Recreation Ground.

Both he and his wife, the Countess Constance (see additional content for her history), were keen equestrians and closely associated with the Whaddon Chase Hunt and Lord Rothschild’s Staghounds.

They enjoyed 53years of marriage. The couple and their only child Lady Mary, are buried in a place of honour in the south-east corner of Stewkley churchyard.

The very fine pair of cast iron gates that you see at the entrance to the house were made by William Grace, who owned Tythe House in the 1950’s. The exotic peacocks were cast in lead from hand fashioned moulds.

According to William’s son John, who still lives in the village, when he was a young lad, he and his friends used to have trials of strength with these gates. They had contests to see who could indeed lift one! Lifting one off was apparently not so much of a problem, but the real test of strength came when you tried to lift it back on again. Please do not attempt it!

The Countess of Orkney, who lived in Stewkley at Tythe house for 53 years before her death in 1946, was a true Victorian ‘rags to riches’ story. She was born Connie Gilchrist and was pushed into child stardom by her mother.

Born in 1865 in the slums of Agar Town, behind Kings Cross Station in London, Connie Gilchrist became a child artist’s model, actress, singer and dancer. At a very young age she attracted the attention of Victorian painters. She was the “young child” who posed for a famous painting, The Music Lesson in 1877 by Lord Frederick Leighton, who was the leader of the Neo-Classical art movement during this period. The painter James McNeill Whistler and writer Lewis Caroll and aristocrats Lord Lonsdale and the Duke of Beaufort were also admirers.

In the 1880’s Gilchrist appeared on stage performing vaudeville burlesque at London’s Gaiety Theatre in Drury Lane. It was here she became known as the ‘orginal Gaiety Girl’ and she also toured across America. Connie Gilchrist was the mistress of two British Aristocrats. The 4th Earl of Lonsdale bequeathed her a London house and sizeable
legacy amid some scandal.

Her second benefactor, the 8th Duke of Beaufort became her adoptive father. In July 1892 he is said to have stood in for her father when Gilchrist aged 27, married Edmund FitzMaurice, 7th Earl of Orkney at all All Saints Church, Langham Place.
Though a Scottish peer, Orkney owned no property or other title there, but had inherited revenue-earning land in Ireland and an estate in Buckinghamshire. After their marriage, being excluded from British upper class society at the time, the couple quietly retired to Tythe House in Stewkley.