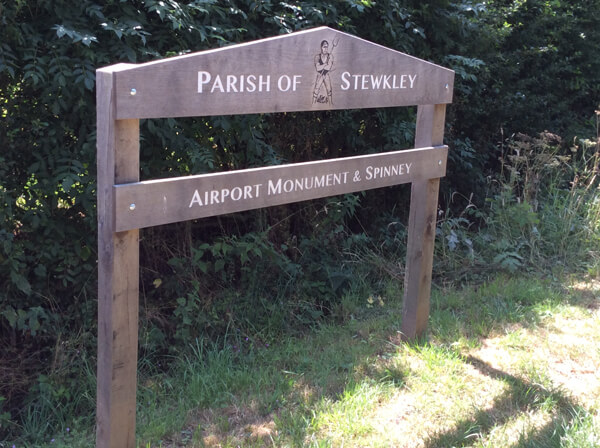 The Battle to save the village of Stewkley from destruction

The Airport Monument and Spinney was created in 1972 to commemorate victory in a campaign to prevent Stewkley and three smaller villages from being destroyed to make way for what would have been the biggest airport in Britain. The Monument, created in the shape of Concorde, then the fastest and noisiest of passenger aircraft, marks the centre of what would have been the four runway airport.

The new airport proposal came after Britain’s longest and most expensive planning inquiry and would have led to the largest forced eviction of people from their homes since the Highland clearances.
Stewkley’s future was the subject of three parliamentary debates before the Government of the day threw out the plan. The campaign had been waged over two and a half years and the sign of a villager with pitchfork protecting church and village symbolised the determination of the community not to be moved.
Stewkley resident John Flewin was a freelance journalist living in Drayton Parslow when the airport battle began. He was appointed Press Officer for Wing Airport Resistance Association and had a close working relationship with the Stewkley Action Committee. This is his short account, but a more detailed dvd is available via this link:

Stewkley resident John Flewin was a freelance journalist living in Drayton Parslow when the airport battle began. He was appointed Press Officer for Wing Airport Resistance Association and had a close working relationship with the Stewkley Action Committee. This is his short account, but a more detailed dvd is available via this link: 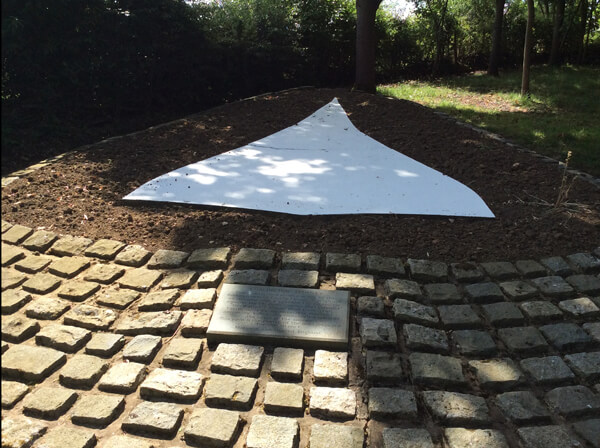 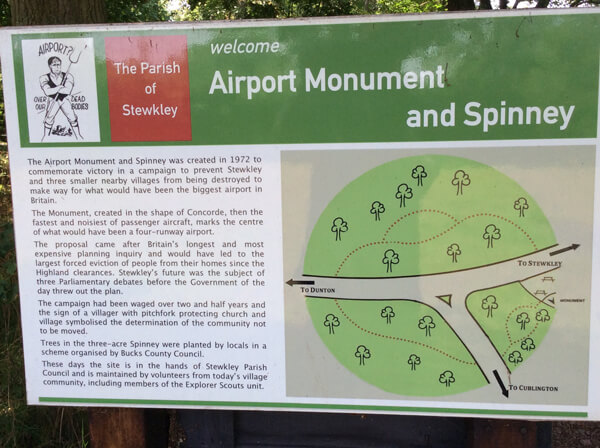 Transcription of the airport monument & spinney

Area 1.1 The Airport Monument & Spinney
Travelling out of the village on the Dunton Road it’s hard these days to image that the area around you would have been the heart of Britain’s biggest airport, a four-runway affair bigger than Heathrow, Gatwick and Stansted put together. That was the threat back in the 1960s and 70s when a commission appointed by the Government chose the site for London’s Third Airport.
As a reminder of that time, the spinney that now occupies the three areas around the road junction is made up of trees planted by villagers as a reminder of a victory that was not secured until after a huge campaign and three debates in Parliament.
A sign at the entrance to what has become known as the airport spinney is topped by a figure of a local, arms crossed, pitchfork in hand, standing astride Stewkley and its church, as if vowing to protect the village. It was created by a local artist and used throughout the two and a half year battle.
At the heart of the spinney, painted white, sits a concrete shape of Concorde, symbolically marking what would have been the centre of the airport, the entire village of Stewkley as well as the nearby villages of Cublington and Dunton, flattened, their communities evicted.
The spinney, created in 1972, each tree planted by a local, was in the ownership of Buckinghamshire County Council, but by the turn of the century and with money short, it was sealed off to prevent access by travellers, and was allowed to return to nature.
In 2014, Stewkley Parish Council took the site over, signing a 99-year lease . Since then, a total transformation of the area has taken place through the work of a team of seemingly tireless volunteers. The once-neglected green space has now become a fitting reminder of a time when the village fought the threat of destruction.
The spinney’s three areas are “petals” that straddle the road junction. The focus of the work has been to fully restore the Monument Petal whilst leaving the westerly Kingsbridge petal largely to nature with the third “Penton Farm” petal providing an ideal location for Stewkley Explorer Scouts’ countryside activities.
Spring is probably the Spinney’s best time of the year, the daffodils flower and fade, the cowslips and bluebells replacing them, all ahead of the green leaves of newly refreshed trees.
It was on a foggy Sunday morning in February 1971 that three hundred farm vehicles, each decked with anti-airport signage, drove in procession past what is now the spinney, just one of the many moments of protest that enabled the villagers’ campaign to go down in history as a campaign of the people.