Other Cllrs in attendance:
Cllr Pryke, Cllr Delafield, Cllr Wodey, Cllr Burgess, Cllr Bottomley,
The session was held using the powers delegated to the Chair, Vice Chair and RFO. Members of the public were invited to submit written comments via the clerk.

1. Receive Apologies: to accept apologies for absence.
Cllr Pragnell was unable to attend the session due to difficulties with Wi-Fi transmission.
It was noted that Cllr Paul Smith had resigned from his long-standing role as a member of Stewkley Parish Council which had included the leadership of the Council and much hard work.
Cllr Higgins noted that after such long service it was unfortunate that Paul’s departure from SPC was difficult to mark in a satisfactory way at this point.

2. Open Forum: Written communications had been circulated to Cllrs.

4. To confirm the minutes of the previous PC Meeting on 2nd March 2020.
The minutes were confirmed as an accurate summary of the meeting.

Visitor car parking needs to be appropriate and spread around the development otherwise it will encourage parking on the road. The proposed layout has the majority of visitor parking spaces on the side of the development with the fewest houses.

The proposed housing mix includes 5% of new 5-bed houses. The Stewkley Neighbourhood Plan (submitted to AVDC) highlights that there is an ‘excess’ of large 5 bed houses in the village. There is not a requirement to add to this ‘excess’ as the supply is already accommodated.

The layout and location of houses does not fit within the character of such a large development in a village location. The development should have a ‘staggered’ setting with appropriate landscape to fit within the character of an organically developed plan as opposed to a regimented layout of houses all in a row with equal spacing similar to any new suburb of any town in the country. It is also noted that the affordable housing is concentrated around one area and not distributed across the whole development. We would like to see a more even distribution of the affordable houses.

The house at Plot 17 adjacent to no. 15 Orkney Close is in extremely close proximity and does not adhere to the minimum depth discussed in para 5.14 of their Planning Statement ensuring a high standard of amenity for future residents. We would like to see this same consideration for amenity given to this location.

The house types appear to be ‘standard’ types used all around the country. We would like to see the design of the houses with more variety, picking up local and differentiating features and matching local brick types, roof finishes, etc

a) Resolution: to delegate the financial responsibilities of Stewkley Parish Council to a duly delegated committee consisting of the Chair, Vice Chair and RFO.
This resolution was unanimously supported by the members.
b) Budget Monitoring. Clerk.
The budget monitoring was noted. An additional update was requested to show the actual financial year end figures.
c) Insurance matters.
Councillors agreed with the Clerk’s decision to increase the level of insurance for various items such as lawn mowers at the Rec.
d) AGAR delay of publication –
Cllrs noted that due to the Corona virus the publication of the accounts would be delayed until Sept 2020
e) End of Groundworks NP Grant report –
It was noted that the End of Grant report had been completed and submitted to Groundworks.

The following payments were circulated by email to all Cllrs and were noted. 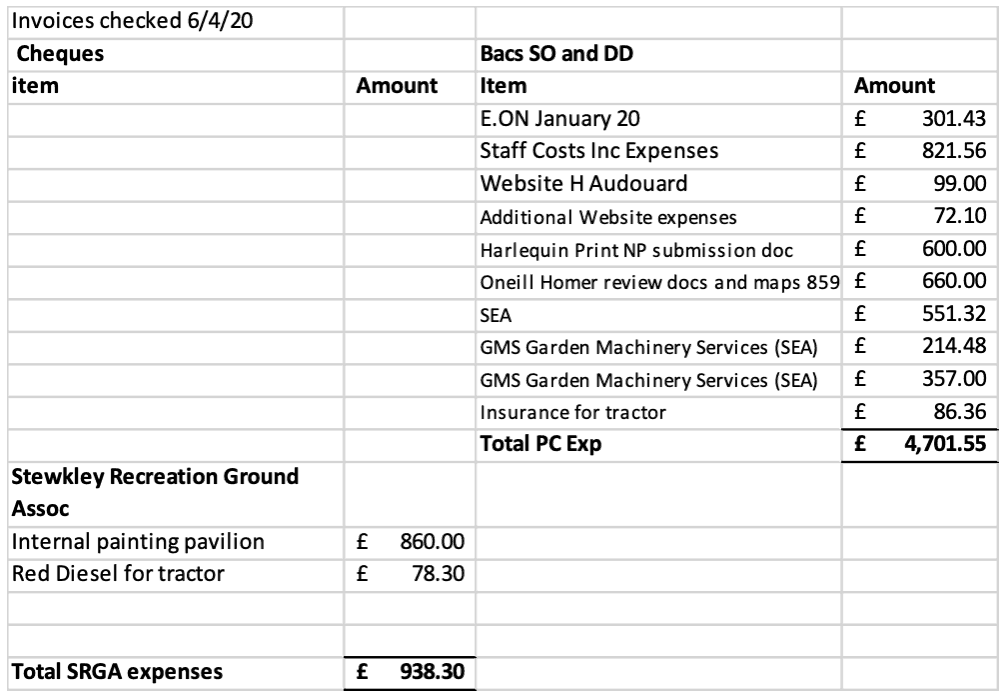 7. SPC response to Corona Virus
a) Proposal to transfer £1000 from “Major Projects” to new heading “Corona Virus” with an option to increase the amount as events unfold
This motion was agreed unanimously

b) Proposal to agree a process to reimburse volunteers that make payments for goods for supported villagers.
This motion was agreed unanimously based on the paper presented by Cllr Morgan

c) GDPR during Corona Virus. (summary in Dropbox). Store e-cards will not be adopted at this time but will be kept under review.
The summary was noted.
Parish Council response to Corona Virus (summary in Dropbox) The summary was noted.
The council noted and duly record the thanks extended to the community by the headmaster of the school. The generosity of donations to the school foodbank has enabled 11 families to be helped in the past week.

8. To discuss correspondence received since last meeting.
a) Closure of public meeting spaces and reorganisation of future meetings. APM and SPC AGM
It was decided that the current Chair should remain in post. The APM was postponed pending further legislation.
It was decided that Cllrs roles in committees and working parties should continue until such time as a SPC AGM could take place.
b) Parish Council Election cancelled until next May.
Noted.
c) Letter to VAHT re access and service roads Dove St.
Noted.
d) Letter to AVDC re service road.
The response from AVDC was noted.
Action: Clerk to contact AVA Estates Management to find out which agent is dealing with the matter.

9. Neighbourhood Plan: To receive an update from the steering group and agree any actions arising;
Report by Cllr Morgan confirmed that the Neighbourhood Plan had been submitted to AVDC on March 30, to start its progress towards Regulation 15 and independent examination.
The report was noted.
Cllr Higgins thanked all who were involved in reaching this watershed moment and noted particular thanks to Neil Dickens for all his hard work; Janette Eustace for her continued work especially for her efforts in the early stages; Andy Gibbs for supportive work and responsive approach to leaflets and printing and especially for finalising the layout of the Plan; and Steve Nicholl for his forensic and detailed analysis.

11. Highways, Footways and Footpaths Lighting: Update and agree any actions arising.
a) Footpath at the top end of Dove St.
Work has taken place to remove overgrown hedgerow and to kill moss.
b) Lights update
The Safety and Risk assessment report on Streetlights is still awaited.
Action: Clerk to request report from Sparkx.
A light on the Bletchley Rd was reported to Western Power (WPD) for a fluctuating power supply.
A light in Walducks has been reported to Sparkx for repair.
c) Dog waste bags.
SPC noted that dog waste bags have been ordered following accelerated use.
Action: Clerk to ask groundsman not to fill the holder in the pavilion car park for a couple of weeks.
d) It was noted that three green waste bins are missing their lids and others had lids left open:
Action: Clerk to contact waste disposal contractors to seek explanation.
e) It was noted that Ivy Lane resurfacing has been rescheduled for this financial year.

13. Burial Ground: To discuss and authorise expenditure incurred or actions required.
No expenditure
It was decided to approve closure of Stewkley (Lawn Cemetery) Burial Ground except for funerals, interments and maintenance until further notice according to guidance received relating to:
The Health Protection (Coronavirus, Restrictions) (England) Regulations 2020| Made at 1.00 p.m. on 26th March 2020 Coming into force at 1.00 p.m. on 26th March 2020

14. General Items: To report on meetings attended on behalf of the Parish Council and agree whether to add items to the next agenda.
Cllr Delafield reported on a meeting held with St Michael’s CE Combined School regarding 20s Plenty for us campaign.
A meeting held with representatives of the church, chapel and school was felt to be extremely useful and could become a useful 3 monthly addition to SPC meeting timetable in the future.
Action: Cllr Higgins to approach representatives of the above to suggest possibility of regular meetings.