1 Receive Apologies:
Apologies for absence were accepted from Cllr Bottomley and Cllr Pragnell.

3 Declaration of interest in items on the agenda: to declare any interests.
None declared.

4 To confirm the minutes of the previous PC Meeting on 5th August 2019.
The minutes were confirmed as a true record of the meeting and were signed and dated by the Chair, Cllr Higgins.

5 Planning: To discuss planning applications and make recommendation.
There were no items for discussion based on the agenda. Cllrs resolved that an extension should be sought for 19/03178/APP from Parish Support.
Attention was drawn to the ‘discharge of conditions’ on a property in Dunton Rd. The plan showed landscape of trees and shrubs which may be new.
Action: Clerk to add to next agenda.

6 Finance
a) Budget Monitoring.
The budget monitoring report was noted.
b) New Model Financial Regulation 2019 Clerk’s memo was noted.
A working group was set up to work on the Model Regulations to produce a model suitable for SPC and present a draft to the next meeting. Cllr Delafield, Cllr Morgan agreed to form the working group.
Action: working group to meet and discuss.

SPC resolved to bring the budgetary process forward. A working group to be arranged for the second half of October. This will ensure time for setting the precept by January.
Action: Clerk (Doodle Poll)

An additional check of the monthly payments was agreed. Cllr Delafield offered to cross check payments against the bank account statements each month.

SPC decided to acknowledge a letter received from DCK solutions and to add to next agenda for full discussion.
Action: Clerk.

7 To draw cheques, ratify BACS payments and to check accounts:
The following payments were checked: 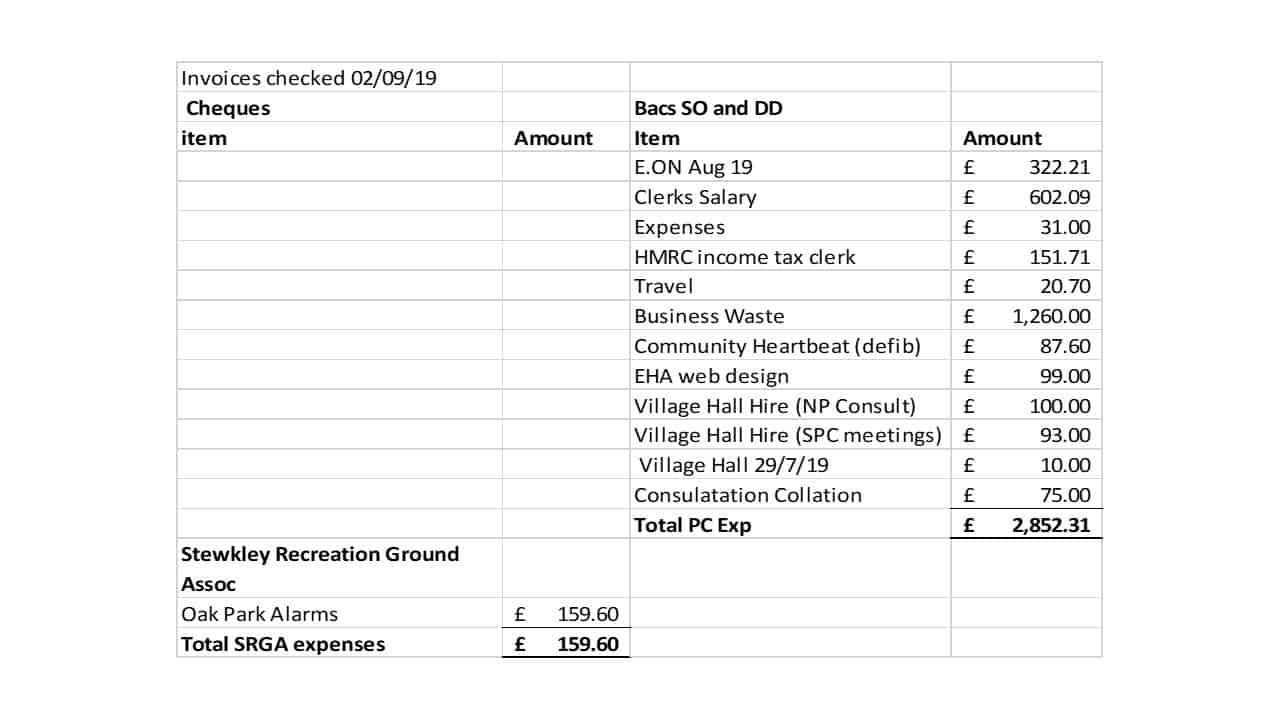 A cross check was made of July’s payments against the bank account statement.

9 Neighbourhood Plan: To receive an update from the steering group and agree any actions arising;
Neighbourhood plan update in Dropbox was noted. It summarised the Consultancy costs and outline of the Grant application.
Stewkley Parish Council resolved the following steps:
i) Engagement of new consultant: Neill Homer;
ii) PC to meet with the Chair and key members of the steering group and agree next steps;
iii) to coordinate a meeting of SPC, NPSG, AVDC and Neill Homer;
iv) to use Neill Homer to complete the Basic Conditions document;
v) to request NPSG make a recommendation on the Policies Map and Inset Map

SPC confirmed its retrospective approval of a payment of £75 for the coordination of the consultation responses.
Action: Cllr Higgins to send note of appreciation.

10 Recreation Ground: To note any outstanding requirements and agree any actions;
Cllr Bottomley has sent the copy of The Rospa report on the adult exercise equipment to Ashland’s where a contact has promised to review the report and revert.
A discussion took place regarding fencing for the children’s play equipment. It will be an aspect to be considered with the plans for new equipment and toilets.

11 Highways, Footways and Footpaths Lighting: Update and agree any actions arising.
Maintenance man’s priority has been the bus shelters: other jobs have also been completed.
A site for the Big Bag of rubbish has been agreed in principle.
Cllr Wodey reported on inquiries regarding replacing the bollard lamps. Broxap.com, who rarely deal with LED lights but may present options, and Artform furniture are both used by Milton Keynes Council. Prices vary from £349 to £699 without fitting costs.
Cllr Higgins reported that he had developed a contact with TfB who might be able to add further information.
Actions:
• Cllr Higgins to connect contact with Clerk.
• Clerk to follow up request for quote from F & M lighting;
• Clerk to contact other Parish Councils re. future planning for lighting;
• Cllr Pryke to contact lighting engineer.
MVAS reports will be updated every month in Dropbox.
Data to be used to help prevent speeding.
Speed indicator device (SID) to add flashing face to encourage safe speeds also to be trialled in week after meeting.
Streets were reported by a resident as being strewn with debris from harvest.
Action: Clerk to request street clean.

13 Burial Ground: To discuss and authorise expenditure incurred or actions required.
SPC agreed to hold further work on the Burial Ground extension until after the creation of the Unitary Authority.

14 General Items: To report on meetings attended on behalf of the Parish Council and agree whether to add items to the next agenda.
SPC resolved to add ‘formal confirmation of acceptance of the Devolved Services extension from 31/3/20 for 2 years’ to the agenda.
Action: Clerk
Cllr Bottomley reported that the ‘Pub Lunch’ was gaining in popularity, averaging 26 in number.
A request for Community Funding for the Scouts Firework display to be assessed before next meeting.
Action:
All Cllrs to consider application in form on Dropbox.
Clerk to add to October Agenda.
Refreshments for the BKV presentation were discussed and a sum of £50-100 agreed to cover costs.
Action: Keith Higgins to send out individual invitations.
Meeting closed 9.24pm