2 Open Forum:
5 young members of the public presented the views of their group known as’ Eco Warriors’.
They urged the PC to use its power to influence other councils and supermarkets to reduce plastic use; to stop litter in the park; reduce pollution; and to encourage greater recycling. The group gave examples of how local and wider problems affected wildlife, climate and other wide-ranging issues.

It was reported that a considerable amount of fund raising had taken place using funds from the New Homes Bonus, Land Fill grants, surplus from Recfest and Obstacle Race Sponsorship.
The Parish Council was asked to support the project with a request for up to £5000 pounds to match further funding efforts.
To complete the whole project will require £70,000. Enough funding has been raised to complete the bulk of the project which could then be extended as further funding targets are reached. Further engagement with the village will be required to amass the full amount.

The project leader publicly thanked the farmers who provided equipment and all those involved for the success of the obstacle course fund raising of £2,200.

A leader from the Stewkley Scouts requested £500 from the Community Fund for a fireworks display.

3 Declaration of interest in items on the agenda: to declare any interests.
No interests were declared.

4 To confirm the minutes of the previous PC Meeting on 2nd September 2019
The minutes were confirmed as a true record of the meeting.

7 To draw cheques, ratify BACS payments and to check accounts.

The following invoices were checked.
Reconciliation for Sept 2019 was also checked. 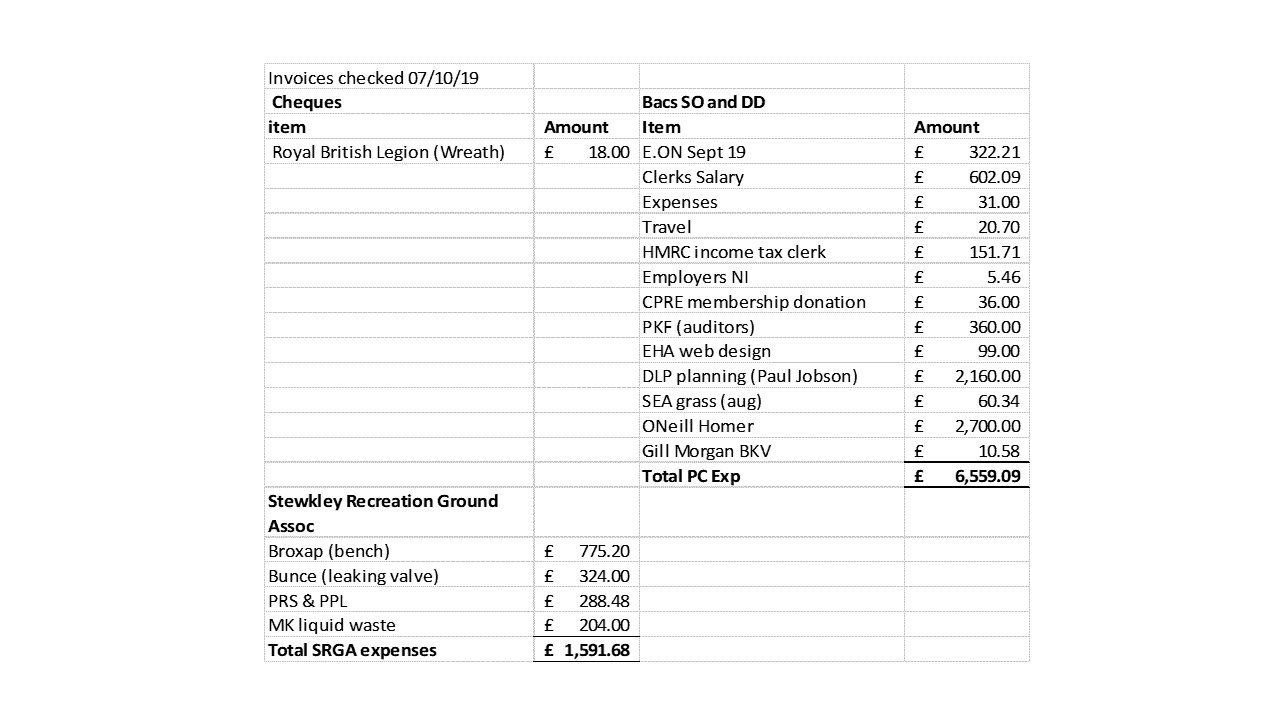 9 Neighbourhood Plan: To receive an update from the steering group and agree any actions arising;

Cllr Morgan reported that the next stage of Consultancy has started. Final invoices had been received for publishing from DLP. The first invoice for consultancy work for ONeill Homer for £2700 was received.
SPC noted success in obtaining a grant of £8000 from Groundworks which will pay for the latter consultant’s fees.

10 Recreation Ground: To note any outstanding requirements and agree any actions;
Cllr Bottomley reported that deficiencies in the adult exercise equipment had been reported to the manufacturer and a response was awaited.

11 Highways, Footways and Footpaths Lighting: Update and agree any actions arising.
a) The Clerk gave a brief report on contacts with other PCs that had jointly researched LED street lighting with SPC in 2015. The following PCs showed interest in working together on next steps: Penn, Edelsborough and Quainton. Wing PC intend to respond later.
Three quotes for repair to runway bollard lights have been received. Sparkx quote being the cheapest. Action – Cllr Higgins to make contact for wider discussions.
A quote has been received to restore the Column in Dove St to vertical and a quote for the replacement of the photo cells has been obtained further quotes to be sought.
Action – Clerk.
b) The new Speed indicating device (SID) has been put in place. The cost of a new mounting kit was agreed.
Action- Cllr Higgins to convene a meeting of the Traffic Subcommittee to continue traffic calming efforts.

Drainage issues on Ivy Lane were discussed. Discussion followed regarding the long-term problem of flooding in Ivy Lane. Action – Cllr Bottomley to ask for drain to be cleared.

SPC agreed £9 for purchase of the 1 tonne Hippobag. They also agreed for the regular cost of £80 for the removal of waste stored in the Hippobag.

13 Burial Ground: To discuss and authorise expenditure incurred or actions required.
SPC agreed to mower repairs of £120 by RE Wright Engineering and petrol for mower at £19.38.
A donation for half the cost of the mower repair was accepted.

14 General Items: To report on meetings attended on behalf of the Parish Council and agree whether to add items to the next agenda.
Cllr Wodey commented on the next Community Bus trip to St Alban sand future trips to MK and Poplars Nursery (near Toddington) which will be entirely self-funding.
Action – Cllr Wodey to update notes from Waddesden Community Transport Project.
Concerns were expressed re hedge removal and car crossing verge to park on Dove St. Action Clerk to contact Vaht.