1 Receive Apologies: to accept apologies for absence.
Apologies were accepted from Cllr Pragnell and Cllr Morgan.

3 Declaration of interest in items on the agenda: to declare any interests.
No interests were declared on agenda items.

4 To confirm the minutes of the previous PC Meeting on 7th October 2019.
The minutes were confirmed as a true record of the meeting and signed by the Chair Cllr Higgins.

6 Finance
a) Budget Monitoring. Clerk. To note (see Dropbox)
The budget monitoring was noted.
b) Financial regulations 2019 – to approve.
The Stewkley PC Financial Regulations 2019 were approved unanimously.
c) Standing Orders –
Minor alterations to the Standing Orders and Councillor Officer Relations were discussed.
d) Revised Standing Orders – to approve
The Revised standing Orders and Councillor Officer Relations were approved unanimously.
e) Resolution 1
The council hereby resolves that the Clerk may make certain payments by BACS, FPO or CHAPS provided that the instructions for each payment are signed, or otherwise evidenced, by two authorised bank signatories, and are retained and any payments are reported to council as made.

This resolution was carried unanimously.

Resolution 2
The council hereby resolves to appoint the Clerk as Service Administrator for the council’s internet banking arrangements, thereby enabling transfers between council accounts of up to £10,000 to be approved at the next meeting,

This resolution was carried unanimously.

f) Budget proposal to discuss.
Discussion regarding the budget took place. Data from BCC for next financial year showed an increase in the tax base from 805.71 to 826.1 which could add approximately £1,030 to the total precept (a 0% increase for Band D payment).
Action – Clerk to prepare risk assessment following information re lights and VAT and adjust draft budget; and to add budget discussions to next agenda prior to setting the precept.
Action all Cllrs. To consider the adjusted budget for final decision in December meeting;
and to consider whether to increase the Precept for 2020-21.
Final decision on precept to be taken at January meeting
Further benchmarking data was explained by Cllr Higgins which showed Stewkley has one of the lower precepts in comparison with other local parish councils.

g) DCK solutions meeting will take place at 6/12/19 at 10am.
Cllrs to consider situations for discussion and to pass to Clerk.
Action – Clerk To compile list. 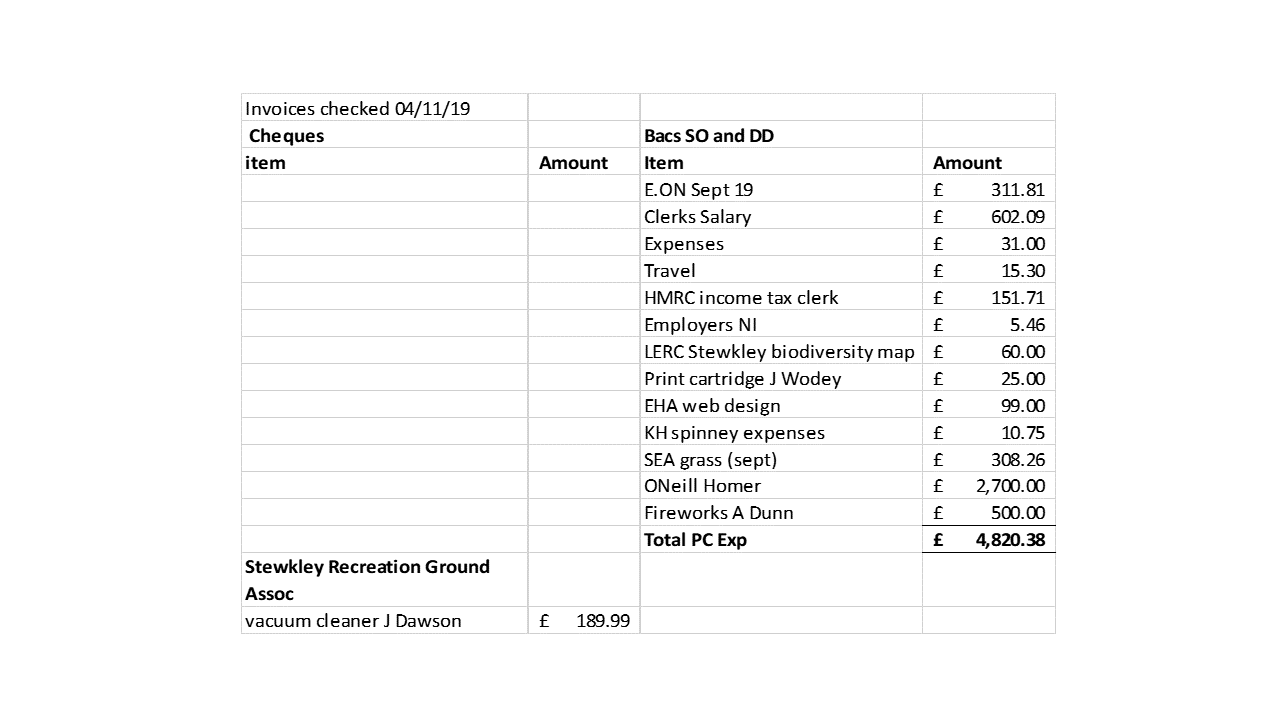 8 To discuss correspondence received since last meeting.
a) Budget Consultation BCC
b) Sunhill Farm Campsite. –
Update Cllr Higgins. Following complaints from residents this issue has been referred to AVDC planning enforcement who have given three options:
i) To apply for planning permission to change the site to Sui Generis.
ii) To become a licensed member of ‘The Camping and Caravanning Club’ with a maximum of 5 plots.
iii) To cease camping operations on site.
c) Lunch Club – Cllr Bottomley explained that with the closure of The Swan, the venue for the Lunch Club has been moved to The Carpenters Arms which would be welcoming 31 members, for a two-course lunch, at the same price as at The Swan of £7.
d) Use of Drop Box.
Discussion on the value and effectiveness of Dropbox to Cllrs took place.
Action – Clerk to add appropriate documents to Dropbox and to send them to certain Cllrs when the agenda is set. Also, to investigate alternative cloud storage.
e) Nation’s Toast to Heroes – Add to website –discussion
The cost of adding external agencies advertising to the PC website was discussed and it was decided not to use the website for this purpose at this time.
Action – Clerk to add the subject of postings either by Facebook or the website to next agenda.
f) Ox Cam Expressway was discussed briefly
The Council was urged to take a position on this issue although the process cannot be stopped it may be possible to achieve mitigation of the route through applying pressure.
Action – Cllr Pryke to form a subgroup to help keep SPC informed.

9 Neighbourhood Plan: To receive an update from the steering group and agree any actions arising;
a) Feedback was given on the number of sites in the Draft Neighbourhood Plan exceeding the requirement from AVDC. The consultant will present arguments to the inspector in favour of more sites.
b) SPC voted on which developments would form its priorities in the development of the plan and they were as follows:
i) Introduce a 40mph buffer zone on the main approach routes.
Currently, vehicles approaching Stewkley can travel at 60mph, the National speed limit, until reaching the restriction signs of 30mph at the entrances of the village. The provision of 40mph buffer zones as featured in other local villages would make drivers more aware that they are entering a built-up area.
ii) Encourage the introduction of community bus schemes.
iii) Develop a Stewkley business social networking club to share expertise and ideas and provide mutual support.
iv) The Parish Council could benefit from an annual meeting with the village young people who attend the various clubs to discuss ideas they have about village life and leisure facilities.

item i) Initial work has shown that this will be expensive. Consultation required to determine which roads would benefit.
Action – Traffic Sub Committee to obtain estimate.
Item ii) Trial runs have been completed.
Action – Cllr Higgins to meet with St Michaels School to gauge possible use.
Action – SPC to discuss further financial support.
Item iii) This item may have to be postponed until after Council Elections in May 2020.
Item iv) Action – Cllr Pryke to seek volunteers for further involvement though a GV article.

10 Recreation Ground: To note any outstanding requirements and agree any actions;
Cllr Bottomley reported that the installers of the adult exercise equipment had not responded to a letter of complaint sent by the clerk.
Action – Cllr Bottomley to follow up with further enquiries and to request a written response stating the company’s position.

11 Highways, Footways and Footpaths Lighting: Update and agree any actions arising.
a) Meeting with Sparkx.
Cllrs welcomed the report on the meeting with Sparkx. Attended by Cllrs Higgins, Bottomley and the Clerk.
Cllrs agreed that Sparkx should replace the bollard in Parsons Walk and straighten the column in Dove Street.
Action – Clerk to organise the above with Sparkx.
b) Proposal to commission a lighting report was approved. SPC decided that immediate additional work could be completed at the same time as the survey, with coordination by the clerk.
Action – Clerk to write to Sparkx and make arrangements.
c) Ivy Lane flooding.
Surface Debris has been removed by the maintenance man, but this has not cured the problem.
Cllr Higgins reported on discussions with Matt Whincup who has added the clearance of the catch pit behind the kerb weir to his list of sites.