2. Open Forum:
A report was given on behalf of the Scouts: a successful fireworks Display has been held the Parish Council was thanked for the donation to cover the cost of the fireworks. The Scouts have 3 grants including a larger grant from the Western Garfield Trust. Their finances are now in place for completing fitting of the Scout Hut. The lease is complete and only the drainage easement requires finalization. The path behind the Hut should be reopened for use by the Tennis Club. The Scouts will arrange the mowing of the area behind the Hut where the tractor mower cannot reach.
A resident informed the PC of her efforts to convey objections to the AVDC planner regarding High Street North. The PC was also told about the hard stand designed for construction vehicles at the back of the site and signs for wheel washing. The resident asked if the PC could ask for site traffic to avoid time when children are walking to and from school.
A discussion took place about whether the defibrillator cabinet in the Recreation Ground could be lockable to deter thieves and vandals. Defibrillation trainers have advised that defib. devices should be available within 400m. British Heart Foundation gave grant on condition that cabinet was not lockable. Clerk to check the insurance for defib in unlocked cabinet.
A member of the public offered to act as a liaison between the PC and local parents e.g. with issues such as The EW Expressway.

Cllr Blake amplified on the discussion re 66HSN. She explained that the constraints of the site meant that meeting the legal requirements for 14 houses made the, originally planned, additional parking impossible. Cllr Morgan pointed out that the recent plan is quite different from the outline plan which met favour with the village. Cllr Higgins added that the village had gained little from this development: no s106 funding; he foresees difficulty in parking; increased road danger especially because of the added traffic in the building phase of the EW railway. A poor series of outcomes for Stewkley.

3. Declaration of interest in items on the agenda: no interests declared.

4. To confirm the minutes: The minutes of the previous PC Meeting on Monday 1 October 2018 were confirmed as an accurate record and signed by Cllr Higgins.

5. Planning: To discuss planning applications and make recommendation.
No new planning items came onto ADVC website before agenda publication. 2 items which subsequently came into the planning portal will require extensions from the planner as they time out before the next meeting. Clerk to contact planner.

6. To discuss correspondence and communication received since last meeting and decide on any action.
a) CM/0005/18 & 18/00275/ACC – meeting set up with M Dickman. Cllrs Delafield, Burgess, Higgins, Pragnell and Clerk to attend. Pre-meeting discussion to be arranged. Cllr Higgins to organise.
b) 17/04373 Cricketers Close – Cllr Higgins reported that PC objections had not changed the intention to remove the ‘village parking’ from the plan. Cllr Higgins to write letter to Cllr Strachan.
Cllr Pryke noted that the parking for construction traffic had a 300mm depth of concrete which is more than needed and would be unlikely to be removed after building. He proposed that PC should object to this part of the plan. This proposal was agreed. He reiterated that the signs are too close to the junction of the development and should be moved back for safety. Cllr Pryke to summarise for Clerk to forward comments to planner.
c) Data Protection and FOI. Cllr Morgan noted that Sheet of Charges and Inventory of General Data held by PC would be finalised by December PC Meeting. Clerk to complete.
Standing Orders would be updated. Cllr Morgan to complete.
All Cllrs to have separate email addresses for Council business by next meeting.
d) Councillors details for noticeboards. It was agreed that a copy of Cllrs’ email addresses, home addresses and Phone numbers would be added to the Village Notice Board, after some typographical errors were corrected, for the use of residents who do not have access to the Website.
e) Scout Hut Lease – Cllr Morgan informed the Council that the lease was ready for signing and only the easement remains incomplete. Clerk to contact Peter Cathcart and request an update on the easement lease.
f) Remembrance Day – PC noted that preparations for barriers, signs, silhouettes and wreath are in hand.
g) Community transport project – Cllr Wodey commented on the intention to measure the need for CTP by having trial shopping runs, firstly in December, using the Winslow minibus. These to be advertised in GV.
It was proposed that the PC supported the project by subsidising it with £100 for fuel with the prospect that some or all of this cost would be recouped in charges. Unanimously adopted.
h) Linkman – Cllr Bottomley reported that there was no progress at this stage.
i) NBPPC – Cllr Morgan informed PC that the meeting between NBPPC and Cllr Strachan (AVDC Planning and Enforcement) was cancelled. Cllr Strachan will attend the next NBPPC meeting to introduce himself.
Cllrs Pryke and Morgan to attend Consultation re Ox-Cam Expressway with Highways England 14 Nov 3-6.30pm
j) Phone box Stockhall Crescent – Phone box is due to be removed possibly when the BT team is in Stewkley in 2 weeks or in March.
k) Joint GDPR training with Wing PCC. Clerk to establish date and time and determine which Cllrs have training need and can attend.
l) Pub Lunch Club. Cllr Bottomley reported that 16 residents had agreed to attend for 2 Course meal in The Swan. Club to be held first Wednesday every month. Attendance of PC members by rota was thought to be a good idea. Cllr Bottomley to organise rota and report
m) Dove Street – tarmac for side access – VAHT email will be sent to residents to explain the next steps in improving the side access and providing Dove St residents with the opportunity to park their vehicle overnight and access them in the morning.
n) BALC meeting Cllr Higgins and Clerk to attend Fri 9 Nov.

7. Neighbourhood Plan: Update from the N Dickens, Chairman of the steering group was received.

8. Recreation Ground: To note any outstanding requirements and agree any actions; None

9. Highways, Footways and Footpaths Lighting: Update and agree any actions arising
Speed watch has restarted with new members receiving training.
Cllrs noted availability of a grant for electric car charging points on lamp posts. However, there are no lamp posts in Stewkley that fit the criteria for this grant.
The Council noted that the street lights that had been reported to the Clerk as not working have all been reported to CU Phosco. Clerk to monitor progress.
Cllr Pryke asked about progress on Footpath No 1 which he had raised in October meeting. He added that barbed wire had been put across the path at the bridge end of the field. Clerk has reported previous matters to Enforcement section at BCC and will add the barbed wire information to the report.
Traffic subcommittee to meet: Cllr Bottomley and Cllr Higgins.
Clerk informed PC that an issue with stones on grass verges in High Street South had been resolved.
Cllr Higgins agreed to contact GV to try to reduce parking on grass verges. He will discuss parking along HSS with Landlord of Carpenters Arms.

11. Burial Ground: To discuss and authorise expenditure incurred or actions required
a) Burial ground tap pipe housing has been very well repaired by B Scott at no charge.
b) Site meeting re Burial Ground Rules determined that the number of obstacles to grass cutting was increasing and that action should be taken to ask bereaved families to restore plots to remain within the Rules of the Burial Ground. Clerk to make contact.

13. To draw cheques and ratify BACS payments – Noted and checked by PC 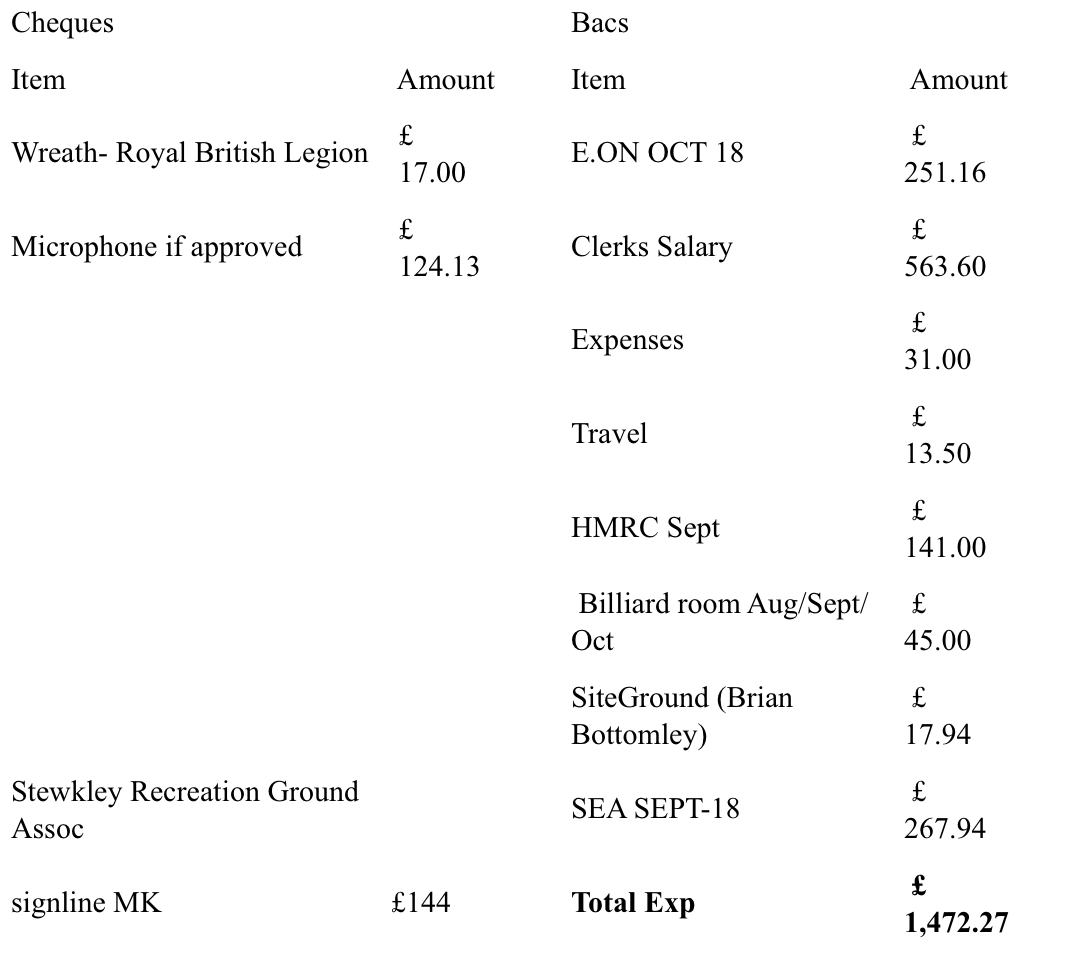 14. General Items: Cllrs requested a discussion on defibrillators should be added to the agenda for next meeting.

15. Date of next meeting Monday 3 December

16. Confidential Discussions. To be minuted separately