2. Open Forum:
Cllr Everitt BC gave a summary of the planning reforms in the White Paper which is currently out to consultation. The white paper sets out major reforms in planning to:
reduce complexity: avoid discretion; speed up decisions; be more transparent and move to modern technology.
Planning will be split into 3 zones: protected, renewal and growth. Applications in growth zones to have a ‘presumption of approval’. BE urged SPC to engage with the consultation to ensure that local consultation becomes a part of the planning process particularly in green zones.
He further pointed out that in moving to Unitary status there is an opportunity for transformation. Amongst other key changes is repurposing of personnel and improving processes, BC intends to have a greater emphasis on enforcement.
Cllr Raven BC offered support to SPC.

A member of the public spoke about demography of the ethnicity in Stewkley.
The speaker asked SPC to:
i. make its position on racism clear as a lead to the community.
ii. To plan what it will do to ensure a welcome to people of diverse ethnic backgrounds who may be considering moving to Stewkley.

Other ideas were discussed to start a conversation and raise awareness that would help identify institutionalised racism.

It was noted that Cllr Smith had not attended the previous Zoom session. With that modification the minutes were passed as a true record of the previous sessions.
Cllrs noted and endorsed all decisions of the group with delegated authority.

4. Declaration of interest in items on the agenda:
No interests were declared.

5. Planning: To discuss planning applications and make recommendation.
a. Determination as to whether prior approval is required in respect of transport & highway impact, noise, contamination risk, flooding and locational considerations for the conversion of agricultural barn into three dwelling houses (Class Q(a)) and in relation to design and external appearance of the building (Class Q(b).
Upper Dean Farm Dean Road Stewkley Buckinghamshire LU7 0EU
20/02099/COUAR expiry 8th September 2020.
SPC decided to object.

Comments Stewkley Parish Council were disappointed that their objections raised on 7 April 2020 did not appear to have been addressed. Despite the best endeavours of the council to meet with the developers, no such meeting was arranged. Consequently, Stewkley Parish Council has no option but to restate most of its objections to this application.
At their meeting 07 September 2020, Stewkley Parish Council resolved to object for the following main reasons:
Intrusion on existing houses
5 Bed House types.
The layout and location of houses does not fit within the character of such a large development in a village location.
It was decided to contact the developer Dandara to ask for a meeting to try and resolve the objections above.
Action Clerk – write to Dandara contact.
(2008 hrs Cllr Everitt left meeting.)

c. Kiln Home Farm
Members of the public reported recent excavation in an area not related to the planning application Ref. No: 19/01179/APP or 19/A01179/DIS.

Action – Cllr Higgins to contact the architect and landowner to clarify.

7. To ratify BACS payments, accounts and burial ground check.
No burial payments
Accounts checked and agreed by Cllr Delafield
Payments were ratified as below: 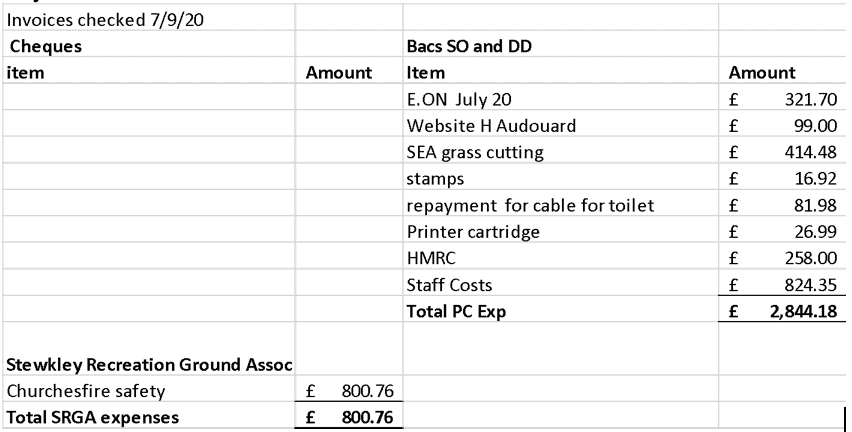 8. Corona Virus Actions
The number of actions by the volunteers has dropped considerably. Volunteers were asked to carry on in case circumstances changed in the future.

9. To discuss correspondence received since last meeting.
a. Black Lives Matter. SPC position statement.
Parish council agreed to reiterate the section of the Code of Conduct which all Cllrs agree to on taking Public Office. Furthermore, the PC will lead with statements from the NP re equality.
Action Cllr Morgan – provide position statement for GV.

b. Format for future PC meetings.
It was decided that full PC meetings would be continued on a month by month basis.
Action Clerk- to contact the VH committee with the decision.

c. It was noted that Cllr Christine Pragnell had stood down during August. Cllr Higgins reported that he had thanked her for her work as a councillor.

d. The proposal to co-opt 2 new Councillors, following applications and discussions, was approved unanimously.
Action Clerk to approach the new Cllrs to let them know their application has been successful.

e. It was agreed in principle to support a bulb planting proposal from St Michael’s School subject to further discussions on locations. A sum of £100 was agreed.
VH agreed to the planting. Further discussions to agree locations for planting in The Rec. and in the BC verges that are managed by SPC.
Action Cllr Higgins to liaise with The Rec committee.
Action Cllr Bottomley-speak to SEA.

10. Neighbourhood Plan: To receive an update from the steering group and agree any actions arising;
An update on the NP was noted. It was reported that Stewkley’s NP is first in the queue when BC moves on regulation 16.

11. Recreation Ground: To note any outstanding requirements and agree any actions;
No report

12. Highways, Footways and Footpaths Lighting: Update and agree any actions arising.
a. Problems with footpaths have been identified in preparation for a conversation with Matt Whincup. Action Cllr Bottomley and Delafield.

b. Wildflower verges.
Cllr Wodey reported that information regarding the locations of the wildflowers in the verges was available. The PC intends to leave areas unmown to encourage flowering.
Action Cllr Bottomley to discuss mowing/strimming regimes with SEA.
Action Cllr Wodey to pass on information about which areas should be left unmown.

c. Transport Subcommittee report was noted.
A new site for the speed indicating device has been installed outside the farm shop in Littlecote.
Purchase of a further MVAS or SID is under consideration as is the investigation to reinstall warning lights for the school crossing near the VH.
School children’s posters are being made to support the campaign for 20’s plenty in the heart of the village

d. Lighting renewal and maintenance plans are in preparation.
Streetlights in Fishweir and Walducks have been reported for repair. Cllr Wodey reported that a light in Dean Road was flashing intermittently.
Action Clerk to report all for repair.
Lighting renewal quotes have been sought but no companies have offered to quote for the work.
Action Clerk to seek further quotes and to invite a representative from Aylesbury Mains for further discussion.

13. Stewkley Wildlife Reserve: To discuss and authorise expenditure incurred or actions required;
Notice board at top end of Drovers Lane in need of repair.
Action Cllr Wodey to discuss further with the Wildlife Reserve curator.

14. Burial Ground: To discuss and authorise expenditure incurred or actions required.
No report

15. General Items: To report on meetings attended on behalf of the Parish Council and agree whether to add items to the next agenda.

Potholes in Burial Ground Carpark.
Action Clerk to follow up repair and to obtain quotes for resurfacing.
Oak trees and grass cutting on private ground on Manor Drive raised as a concern by Cllr Burgess.
Action: Cllr Burgess to determine ownership and provide The Clerk with details.
Cllr Burgess also raised concerns about parking on Manor Drive and about Forge Farm Barn being used for mechanical work and car spraying.
Action: Cllr Burgess to liaise with The Clerk.
Cllr Delafield to be offered to participate in TfB meeting if available.

Stewkley will, in future, be covered by the Neighbourhood team of Thames Valley Police based in Winslow and not by Wing. Therefore, the PCSO and potentially police constable will have changed. No report was provided by the police for this meeting.
Meeting closed 22.02pm