2. Open Forum:
A report from TVP was noted.
Cllr Raven and Andrew Jones reported on an application to extend the life of the recycling plant, located mainly in Newton Leys, for a further 15 years. The residents had been told by BCC that the plant would be closed by 2022. MK authority does not support the application.
Electoral review which will reconsider boundaries, numbers of Cllrs and names of areas, is planned to be completed by June 2021. Therefore, this will not affect the 2021 elections but will affect 2025 and beyond.
HS2 works have been hampered by recent flooding.
Speed watch programs are now able to continue. (Stewkley does not currently have its own SW team).
Andrew Jones may attend future meetings as a representative of Cllr Raven.

4. To confirm the minutes of the previous PC Meeting on 7/9/20.
The minutes were confirmed.

6. Finance
a) Budget Monitoring.
A report from the Clerk was noted.
Action – Clerk to set up dates for a Zoom Budget setting meeting.

To draw cheques, ratify BACS payments and to check accounts – to note (see Dropbox)
The invoice list was approved. 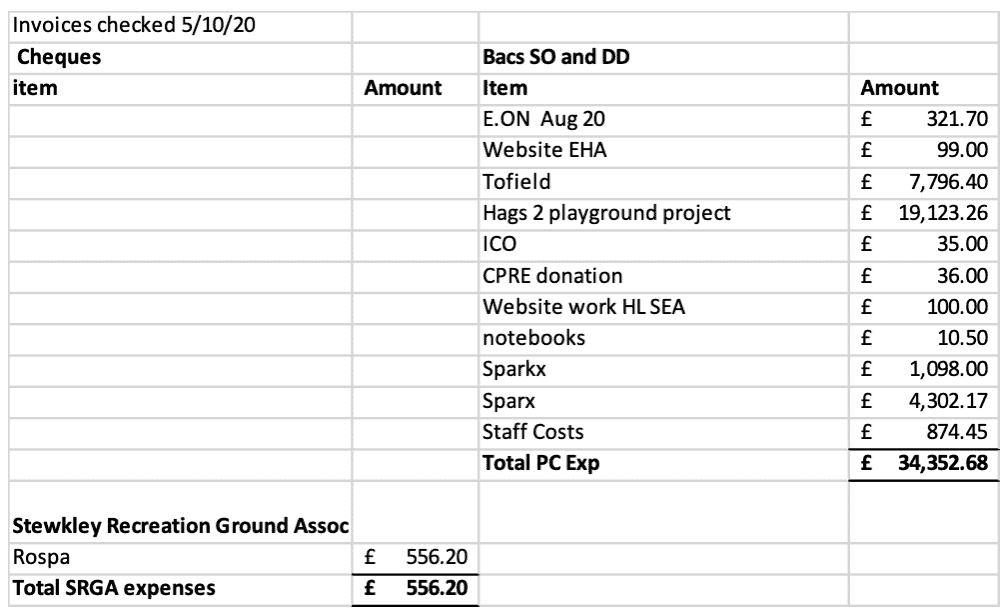 SPC Response to Corona Virus;
In the light of a possible second wave it was decided to remind the public of the volunteer CV support network.
Action – Cllr Morgan to send a statement to the GV.

9. To discuss correspondence received since last meeting.
a) Bulb planting project –
Cllr Higgins reported that in response to a bulb planting initiative from St Michael’s School, Dobbies had offered daffodil bulbs; SPC promised £100; Abbey Mill Homes promised £100.
Bulbs to be planted along the Rec hedgerow with St Michaels Close up to the Burial Ground (Lawn Cemetery); Along the grass area of High Street North in front of Cricketers Close, other suitable verge areas and around VH.

c) Burning waste on Bletchley Rd –
Cllr Higgins reported that as a result of a visit to a site on Bletchley road where rubbish was being burned, the landowner has received a formal request from BC Enforcement to clear the waste.

d) Road /Estate names Dandara development.
The following names of people, involved with opposing the siting of the national airport in Stewkley area in 1973, have been selected as possible names for the streets in the Soulbury Road development.
Sir Desmond Fennell, Sir Colin Buchanan, Geoffrey Ginn, David Stubbs, Bill Chappell.
A name for the whole development is also being sought.
Action – Cllr Hunt to investigate further names with Hunt family.

f) Equality and other related matters. Amendment to Code of Conduct. (See Dropbox) to approve.
Action – Clerk
to ensure correct equality statement is added to website;
to check principle authorities’ Code of Conduct with possibility of use for SPC.

g) Friends of St Michael’s School -Santa sleigh fund raising.
The intention to have a Santa sleigh was noted.

h) Linxman standing down.
Update deferred to next meeting.

10. Neighbourhood Plan: To receive an update from the steering group and agree any actions arising;
An update on the NP was noted. It was reported that Stewkley’s NP is first in the queue when BC moves on regulation 16.

11. Recreation Ground: To note any outstanding requirements and agree any actions;
Playground project
The play equipment has undergone Rospa test and once it was shown to be compliant was opened to the public.
The toilet facilities should be available once work on safe access has been completed.

c) Consultants for streetlights for the Soulbury Rd development have approached the PC and confirmed that the lights will be offered for adoption. Clerk has sent specifications of the newer type of lights used elsewhere in Stewkley.

13. Stewkley Wildlife Reserve: To discuss and authorise expenditure incurred or actions required;
A hay crop has been taken which was of particularly poor quality.

14. Burial Ground: To discuss and authorise expenditure incurred or actions required.
SPC gave guidance to The Clerk to permit a memorial application. Although the application did not fit entirely with the guidelines, the excess was felt to be minor.

15. General Items: To report on meetings attended on behalf of the Parish Council and agree whether to add items to the next agenda.
A lawn mower for The Spinney to be purchased at a cost of £83. To be stored by the main user.
Cllr Burgess enquired whether parking space for an elderly resident could be provided but Cllr Higgins pointed out that such requests are extremely unlikely to be met based on previous information.
Incidences of parking on High Street North have blocked the pavement causing pedestrians to walk out into the road. Cllr Higgins pointed out that this type of parking is an offence and should be reported to the police using 101.
Action-Clerk and Cllr Higgins to contact PCSO and ask for police presence at school travel times. Clerk to ask if a communication link could include the PCSO. E.g. WhatsApp group.

Next meeting to be held by Zoom
Date of Next Meeting. 2nd November 2020