2. Open Forum:
Ben Everitt MP and BC Cllr explained how he would fulfil his role as the Cllr from the new single tier, unitary authority to the parish councils in the Great Brickhill ward which now includes Stewkley Parish. He intends to continue in this role until the next elections in May 2021. He has particular interests in helping with Parishes during Corona Virus and in planning processes, including supporting Stewkley in calling in applications if asked. SPC raised his awareness of their objection to the Soulbury Rd development and of the poor state of the road from Stewkley to Mursley.
A member of the public clarified some details in planning application: 20/01668/APP

3. Declaration of interest in items on the agenda:
No interests were declared.

4. To confirm the minutes of the previous PC Meeting.
Minutes of meeting 2/4/20 confirmed (but not yet signed or dated).

b. Determination as to whether prior approval is required for:
Old Lower Dean Farm Dean Road Stewkley Buckinghamshire LU7 0EU
20/01793/COUAR | Expiry date Mon 13 Jul 2020.
Stewkley PC confirmed the resolution from 1/6/20 to pass no comment on this application.

c. Soulbury Road.
Cllr Higgins explained that there had been no response to the invitation to Dandara from SPC to discuss the objections made by SPC to the application. Cllr Scott Raven BC has recommended that the application be called in to give the PC a chance to object to the plan as it stands.
Action-Clerk to write to Dandara to repeat a request for a discussion or conference call.

d. Sunhill Farm.
Cllr Higgins informed the Council that Sunhill has been granted approval to operate a campsite under conditions including the following:
Maximum of 9 camping areas.
No Caravans or motorhomes.
Improving gateway by moving gate back.

e. Confirmation of decisions made under delegated powers.
All decisions made under delegated powers during April, May, June were confirmed by the whole council as follows:
4/4/20
Planning: To discuss planning applications and make recommendation.
Reserved matters application pursuant to outline planning permission 16/02551/AOP landscaping, Layout and Scale) to provide 67 residential dwellings Land Off Soulbury Road and Dove Street Stewkley,20/00823/ADP

k. 8 High Street North Conversion of Stable Block into residential annexe accommodation.20/01668/APP Seek extension and to ask for further details of plan to be uploaded.

The recently reviewed Risk Assessment was discussed, and its finalisation was agreed and delegated as before. As a part of the risk assessment for valuable documents the PC agreed to purchase fire storage containers. To be approved at the next full PC meeting.

Purchase of Netbook for Traffic Subcommittee (£78.24)

Application that was validated and expired between June and July PC Zoom Meeting.
20/01793/COUAR determination as to whether prior approval is required for conversion of one agricultural building into one dwelling house. Resolved by email to give No Comment

6. Finance
a) Budget Monitoring. Clerk. To note
The budget monitoring was noted.
b). VAT claim for Q1 2020 of £534.54 was noted.
To draw cheques, ratify BACS payments and to check accounts –
7. Cllr Delafield commented that the accounts checks had taken place and were up to date following the period without formal meetings. The checks were noted.
Invoice list
The following payments were approved as shown below:
Invoices checked 6/7/20 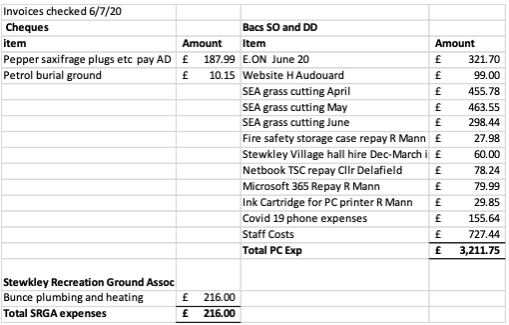 8. SPC Response to Corona Virus;
The Clerk reported that although the number of requests for support had dropped there were still more than 25 calls in July.
Food bank during school summer holidays.
Action: Cllr Higgins to contact school re offer of support.

9. To discuss correspondence received since last meeting.
a. Play Around the Parishes.
Slightly varied programme for 2-4pm 24th August 20 at reduced rate (-£40) because of deletion of bouncy castle from event.
Awaiting final confirmation of safe continuation from BC.

b. Balc Guidance on Website accessibility.
Cllr Bottomley explained that by 23rd Sept 2020 the Stewkley Parish Council website will have to comply with new accessibility regulations. it will need an accessibility statement that:
a. identifies gaps and
b. makes a plan to reach the required standards.
Progress has been made in identifying 35 issues that are noncompliant.
Action: Cllr Bottomley to discuss alternative ways to reach compliance with the website manager.
It was noted that compliance is not compulsory if it places a disproportionate burden on an organisation.

c. Interest in becoming a Cllr by co-option for an empty seat. update – Cllr Higgins.
Closing date 21/7/20. Interview process.
Action: Chair, Vice Chair and Clerk to interview candidates leading to proposal at the next full council meeting. It was noted that any co-option term will terminate prior to the next election due in May 2021

d. Vandalism.
The recent increase in graffiti was noted.
Action: Cllr Morgan to write on Facebook and Cllr Higgins to write to the GV to encourage villagers to report vandalism, with photographs when possible, directly to the Parish Clerk and to the police. Also, to request that members of the public do not put themselves at risk in attempting to remove graffiti.
Action: Linksman to remove graffiti in future.

Cllr Bottomley raised the motion that the Clerk should formally write to Thames Valley Police the inform them that SPC would appreciate better communication.
SPC agreed with the motion.
Action-Clerk, letter to TVP

e. A member of the public asked whether the addition of bicycle sheds could be considered for the recreation ground. The Parish Council agreed the idea had merit.
Action: Clerk to write to members of the SRGA committee to pass on the idea and to write to the member of public with thanks for the suggestion.

10. Neighbourhood Plan: To receive an update from the steering group and agree any actions arising;
a. Action: Clerk to write to Parish Support and determine whether David Broadley was still the contact for Neighbourhood planning at the new unitary authority.

11. Recreation Ground: To note any outstanding requirements and agree any actions;
The order for the groundworks for the new public toilet was noted.
It was noted that Government guidance for reopening public spaces had been passed to the SRGA committee. Action: Cllr Higgins/Morgan to raise at next Rec Committee meeting.
It was noted that the notice board at the end of Drovers Lane was in a poor state of repair.
a. Action: Cllr Wodey to follow up with the groundsman.
b. It was also noted from a report by the groundsman that hundreds of dog waste bags dispensed but the numbers seen in the bins do not reflect the number being taken.
Action: Clerk to calculate annual costs of dog waste and report.
Cllr Higgins to submit an item to GV on topic.

12. Highways, Footways and Footpaths Lighting: Update and agree any actions arising.
A comprehensive street lighting survey and safety report was received from Sparkx with a quote for £23K for required repairs.
Action: Cllr Bottomley and Delafield to form a working group to form a schedule of repairs and to seek further quotes, as necessary.
Cllr Bottomley pointed out that the footpaths next to the main roads in Stewkley were requiring remedial work. He drew attention to the difficulties for wheelchair users and the people with other disabilities. It was pointed out that gravel from private drives migrates onto the pavements which then increases erosion when vehicles pass.
Action: to build a case including photographic evidence to present to TfB.
Cllr Delafield to log evidence.

14. Burial Ground: To discuss and authorise expenditure incurred or actions required.
a. Petrol expenses £10.15 approved.
b. The Burial Ground extension was discussed.  The potential costs as outlined exceed the budget set for the fiscal year. SPC decided to leave the development pro tem.
Action-Clerk to contact CDS and TGMS for free risk assessment reports.

15. General Items: To report on meetings attended on behalf of the Parish Council and agree whether to add items to the next agenda.
Cllr Burgess drew attention to uncut grass on private land in Manor Drive. She also asked if the SID was working.
Cllr Higgins and other Cllrs are considering joining the first (MS team) Winslow Community Board meeting 16th July 7pm.
Cllr Delafield explained that signs re 20s Plenty for Stewkley designed by the pupils of St Michael’s School would be going up around the village after the holidays.
Cllr Delafield reported that Red Brick Farm was not complying with the planning application conditions: trucks travelling un-sheeted; arriving at 6.30 am; and spilling sand and gravel onto Dunton Road.
SPC approved escalation of complaint to a senior managerial level at BC.
Action-Clerk to write to Enforcement Officer and ‘copy in’ David Sutherland, Cllrs S Raven and B Everitt MP. (Names checked after meeting.)