2 Open Forum:
A group of electors from Dove Street raised concerns regarding the poor condition of the access and service roads on the South side of Dove St. The Council was urged to contact VAHT and AVDC to determine how improvements would be made. Attention was also drawn to moss and overgrown hedges making a footpath unusable at the top of Dove Street where it egresses on to Soulbury Rd. Further comments were added to previous complaints about the ditch in front of properties. In addition, at the top of Dove St., the ditch is overgrown and has been blocked by dumped topsoil. This debris is blocking the culvert and was reported as a potential flood risk.

A resident noted that repair of a light in Dove St had taken an excessive amount of time.

A resident noted that he had incurred damage to his car whilst driving on High Street North/Mursley Rd and that the state of this road was now dangerous as the potholes are now impossible to avoid safely.

A representative of The Recreation Association reported an insurance shortfall some of which related to sports equipment and asked the PC to discuss the shortfall with their insurers and to delegate the responsibility for the Clerk to finalise action with the Rec Assoc. Treasurer.
In addition, the PC was asked to delegate the responsibility to the Clerk to place an order for playground equipment which would be made in the next 14 days. The details to be finalised with the Rec Assoc Treasurer.

A request was made for SPC to accept ideas for projects that could be funded by the S106 money that accrues from the development on Soulbury Rd. The Chairperson suggested that it would form a useful discussion at the Annual Parish Meeting and invited villagers to attend the meeting and to put their ideas to the Clerk for addition to the APM agenda that is published I month before the meeting to be held 18/5/20.

3 Declaration of interest in items on the agenda: No interests were declared.

4 To confirm the minutes of the previous PC Meeting
The minutes were confirmed after a small change was made to the invoice list: a repayment of £240.49 to was altered to read “for mountings for speed indicator device” and not for Spinney expenses.

Discussion took place regarding the points raised by the Rec Association representative.
It was decided to examine the costs of adding additional insurance cover for Sports Club equipment and to further investigate unforeseen liabilities. Also, to ensure a memorandum of understanding with the Sports Clubs involved.
The Clerk was given provisional delegation to make decisions after the above issues have been resolved to the satisfaction of the PC.
Action: Clerk to discuss further with treasurer of the Rec Assoc. and with Insurers. Then to consult with SPC.
The authority to place the order for play equipment was delegated to the Clerk.
Action: Clerk to place the order.

7 To draw cheques, ratify BACS payments and to check accounts

The payments were noted and invoices as shown below were ratified. The accounts were checked. 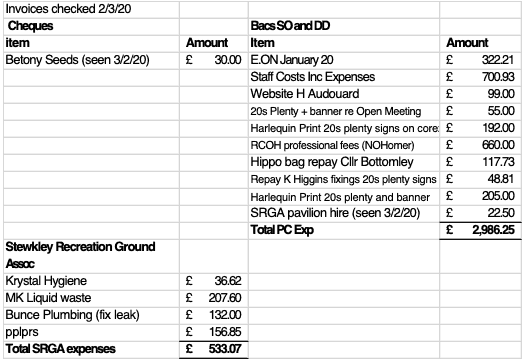 8 To discuss correspondence received since last meeting.
a) Visit to Haddenham Dandara Site.
Cllrs Burgess, Morgan, Delafield offered to attend a site meeting in Haddenham.
Action: Cllr Morgan to coordinate.
Cllrs Wodey and Smith to attend if the organised time is suitable.
Action: Clerk to ask Ward Assoc to resend feedback from Dandara meeting with villagers in a Microsoft friendly format.

c) Faccenda Farm fumes. Complaints to Environmental Agency ref 1780442 –
These complaints were noted.
Others had noted increased smell and black smoke from the site.
Action: Clerk to write to the site manager to enquire if anything has changed recently as the smell is proving a nuisance and loss of amenity for its neighbours.

d) Access road next to 20 Dove St.
Vaht have indicated their intention to begin repairs to the access road – June 2020.
Action: Clerk to write to VAHT and AVDC to request that they coordinate with VAHT to complete a repair of the access roads and rear roads on both sides of Dove St.

9 Neighbourhood Plan: To receive an update from the steering group and agree any actions arising;
The Southern Gateway sites have agreed to the wording to STK3 which now needs incorporation into NP.
The reg 14 comments are near completion.
The background documents supporting the NP are at the final draft stage for submission.
Harlequin Press have completed a first draft which will be circulated for final comment.
The Plan was recommended to SPC for submission before the end of March, and therefore before the next SPC meeting.
SPC agreed to the submission of the finalised plan, delegating the responsibility of signing off the documents to the NP Steering Group.

11 Highways, Footways and Footpaths Lighting: Update and agree any actions arising.
a) Lantern Bletchley Rd replaced – SPC noted that the lantern that had gone missing has been replaced with a new one

c) It was noted that flashing lanterns: Dove St, outside Village Hall, Folding Close have all been repaired.

d) Survey of all lights except Cricketers Close has been completed and SPC noted that the report is expected soon.

13 Burial Ground: To discuss and authorise expenditure incurred or actions required.
No reports.

14 General Items: To report on meetings attended on behalf of the Parish Council and agree whether to add items to the next agenda.
Stewkley PC resolved not to invite prospective County Council Unitary Election candidates to the next meeting.

Cllr Burgess reported that the parking in Dove St is becoming more difficult as the access road to the northern side carparking is in a very poor condition and preventing use.
Actions: Clerk to add request for improvement to the access road on the North side of Dove St to letter to VAHT. See item 11 above.

The Chair expressed disappointment that the new PCSO for Stewkley had been unable to attend the meeting and asked that the invitation is extended to future meetings including the APM.
Action: Clerk to re-invite PCSO.

Cllr Delafield reported that the ‘20s plenty for us’ signs had been mounted on the telegraph poles up and down The High Streets. The bin sticker campaign was underway.

The PC asked the Clerk to invite Mr Greg Smith MP to the APM.

The PC agreed to enter The Tindall Cup as Stewkley’s entry for the Best Kept Village Winners competition.
Cllr Bottomley asked the PC to extend their thanks to Terry Brown for continuing to store the Hippo waste collection bag for use by the linxman.