3. Declaration of interest in items on the agenda: No interests were declared.

4. To confirm the minutes: The minutes of the previous PC Meeting on Monday 4 February 2019 were confirmed as a true record and were signed and dated by Cllr Higgins.

5. Planning: To discuss planning applications and make recommendation.
Replacement Dwelling Planning Application
a) 1 Dean Road.19/00461/APP
Alternative new build proposal to replace previously approved extension. Similar design but improvements in line with PC suggestions
Stewkley Parish Council resolved unanimously to approve the application.
b) CM/0008/19 Variation to condition of planning permission.
Red Brick Farm
This recommendation originally came from the enforcement team: to add soil to the bund and increase the base width to 10M to provide a stable structure without increasing the height.
Despite some reservations Stewkley PC decided to make no comment.
c) Land opposite No. 2 Ivy Lane. Appeal to Secretary of State.
Stewkley Parish Council decided to expand on previous comments by 22/03/19 in writing to the Secretary of State.
Action: Cllrs Pryke and Higgins to formulate response for Clerk to submit.

6. To discuss correspondence and communication received since last meeting and decide on any action.
a) The Street lighting proposal prepared by CU Phosco for the Cricketers development was approved.
b) Dunton Rd Traffic: Cllr Higgins noted that an expected traffic survey at the junction of High Street South and Dunton Rd. did not seem to have taken place
Following reports of inconsiderate driving behaviour, it was agreed to form a group with the intention of opening a constructive dialogue with the manager of Red Brick Farm. Cllrs Bottomley, Delafield, Burgess, Wodey and Pryke volunteered to be in the liaison group.
Action: Cllr Delafield to instruct the Clerk with next steps.
c) Weed killing initiative – the PC noted that the proposed increased weed killing project made public by Cllr Shaw will not add funds to individual parish councils but will support weed killing by TfB elsewhere.
d) Surveys and Council responses – Councillors to inform Clerk which of the surveys received require full council attention at Parish Council Meetings.
e) Organisation of the APM – deferred to 1 April Meeting. Action: Clerk to circulate rules for Parish Meetings.
f) Maintenance Person. – Action Cllr Bottomley to submit advertisement to Grapevine for April edition.
g) BKV Champion – No responses for Best Kept Village Champion received following Grapevine article.
Clerk authorised to enter village in the competition for Tindall Cup.
h) Antisocial behaviour. Disappointment was expressed that another meeting had gone by without presence from TVP despite repeated invitations.
No responses to SPC from Grapevine article on Neighbourhood Watch. It is understood that TVP plans to relaunch scheme in June 19
All victims of anti-social behaviour are encouraged to report to police using phone 101 or TVP website. Action all Cllrs.

8. Recreation Ground: No comments made.

9. Highways, Footways and Footpaths Lighting:
Two Runway, bollard lights have been vandalised again. Clerk to seek quotes for more robust lights.
Footpaths 1/ 22 Action: Cllr Pryke to investigate ploughed path and barbed wire and report back to next meeting.
Footpath 19 closed until Cricketers development reaches a stage when it can be reopened.
Cllr Bottomley asked about progress with the ivy on a lamp post in High Street South. Action: Clerk to follow up.

10. Stewkley Wildlife Reserve: To discuss and authorise expenditure incurred or actions required;
Cllr Wodey asked if the PC wished to preserve the wildlife footage from the Wildlife Reserve Camera. This was agreed.
Action: Cllr Higgins to seek information/support on options.

11. Burial Ground: To discuss and authorise expenditure incurred or actions required.
No report.

12. Finance
Budget Monitoring. The most recent Budget Monitoring Sheet was noted.
Action: All Cllrs to scrutinise/comment on budget proposal in Dropbox for Budget finalisation/ authorisation at next meeting 1/4/19. 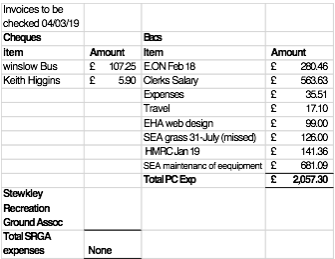 14. General Items: To report on meetings attended on behalf of the Parish Council and agree whether to add items to the next agenda;
a) The Community Bus Scheme has completed 2 trials and has spent £95 of its £100 budget. The group was asked to review the success and report with suggestions on the next steps before the release of further funding.
b) Cllr Higgins represented the PC at a meeting with the governors of St Michaels School. Very useful exchange of information and the PC will be invited to future meetings.