2) Open Forum:
Advice sought from council on appropriate course of action concerning neighbours trees blocking sunlight from garden and an unfinished pavement
Comments from public re planning application 19/01797/APP.
Comments regarding grass cutting on the verges at Ivy Lane

3) Declaration of interest in items on the agenda: Cllr Bottomley declared a non-financial interest in agenda item 5.c.

4) To confirm the minutes: The minutes of the previous PC Meeting at 8pm on Tuesday 7 May 2019 were confirmed as a true record and were signed and dated by Cllr Higgins.

Minutes for the Annual Parish Meeting on Monday 13 May were provisionally approved subject to an inclusion of the verbal report delivered by Neil Dickens as chair of the Neighbourhood Plan Steering Group.

Minutes of the Annual General Meeting of the parish council held on Tuesday 7 May 2019 at 7.30pm were confirmed as a true record and were signed and dated by Cllr Higgins.

c) Demolition of existing garage and construction of detached garage 37 High Street North Stewkley Buckinghamshire LU7 0EZ 19/01797/APP Council resolved to object to this application. Grounds for objection are The existing single garage has recently been demolished without an application or consent and removal of a mature hedge without consent, The location, scale and mass of the new double garage is out of character and is too dominant onto Chapel Square – The windows are not in proportion to the character of the area. There is no application for an enlarged dropped kerb to the garage and therefore damage to the pavement will occur when vehicles cross the pavement.

Additionally, the council resolved to write to Cllr Blake, and AVDC parish liaison and planning enforcement to draw attention to the unsatisfactory number of retrospective applications coming through as building work was being started without the required approvals. 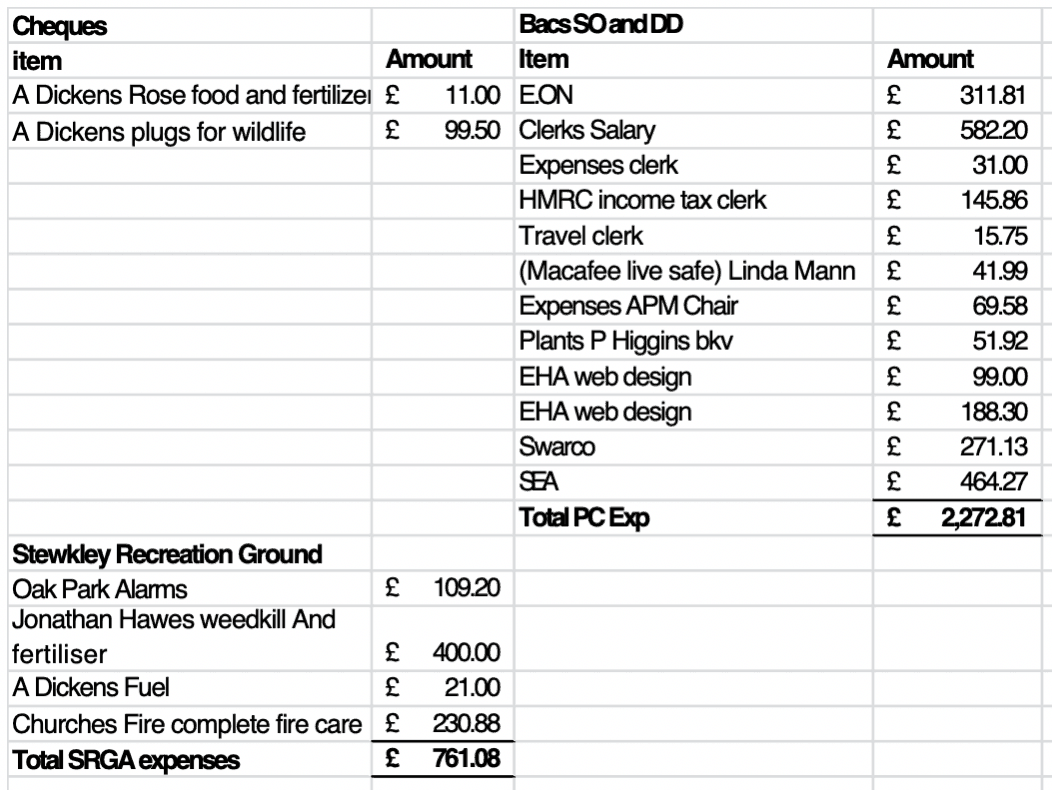 8) To discuss correspondence and communication received since last meeting and decide on any action.

a) RBF liaison: Cllrs Delafield and Pryke will represent SPC on the liaison group which will also include Cllr Janet Blake and Bucks CC representatives. Date for first meeting to be fixed.

b) Standing Orders dated 3 June 2019 were approved and adopted. Clerk to upload onto website.

c) Maintenance Person–Cllr Bottomley reported that a person had been appointed into the role. A village walk will take place on June 22nd with the new hire and the SEA lead contact. Councillors were asked to forward ideas of things that could be done by the maintenance person to Cllr Bottomley before the village walk.

d) 19/01179/APP Kiln Home Farm- Cllr Blake confirmed there was no possibility to put a future planning restriction on this site. AVDC were requested to investigate a possible Right of Way impacted by the application.
Land opposite 2 Ivy Lane Appeal Dismissal – outcome was noted by council

f) APM. Thanks were given to Cllr Bottomley for his work on the audio history tour. Discussion on 2020 APM will be deferred to Autumn.

A £500 budget was pre-approved to enable the printing of the five documents (5 copies of the draft Plan and 2 copies of each of the 4 supporting documents) as well as a banner to advertise the consultation and availability of the hard copies.

Village hall committee to be asked if banner can hang in front of hall from June 17 to July 28, and if documents can be safely stored at hall throughout consultation period.

The Parish Council ratified the decision and recommendation made by the NP Steering Group to remove Site 13 from the Plan on the basis of feedback received from BCC Highways.

11) Highways, Footways and Footpaths Lighting:
Inappropriate traffic control measures in place at Cricketers Close were noted. Works have now finished.
Street light by the vicarage is obscured by foliage. Clerk to contact land owner and request they cut back the foliage.

14) General Items: To report on meetings attended on behalf of the Parish Council and agree whether to add items to the next agenda;
LAF meeting 10 June Cllrs Delafield, Smith and Morgan to attend
Village Hall defibrillator – new pads have been ordered. If help is needed to fit them, suggest we approach our village First Responder.
Cllr Morgan proposed a Stewkley Parish Council Facebook page
A villager has volunteered to provide and fit a new post for the rubbish bin at Tythe Close
The road sweeper is due in Stewkley early June.
It was noted that the ‘keep off the verges’ signs had been very effective in High Street South and the grass verges have improved.
AVDC are holding a planning forum on 11 July.