3 Declaration of interest in items on the agenda: Cllr Smith declared an interest in 5.b and it was noted that he would not be able to speak regarding the item except during the open forum.
It was also noted that all Cllrs had a collegiate and or friendship relationship with the applicant.
Cllr Pryke declared a further interest in that his son had completed the bat survey.

5 Planning: To discuss planning applications and make recommendation.
a) Single storey side and rear extension,173 High Street North
19/04113/APP.
Stewkley Parish Council resolved to support this application subject to a request for the dormer windows to be made opaque.

The meeting was closed, and Open Forum was resumed to discuss the status of the property following the changes to the garage. It was explained that this was an issue for the planner at AVDC. The objections or questions should be raised by the neighbour with the planner.
Following this discussion, the meeting was reopened.

Stewkley Parish Council resolved to support this application subject to conditions being followed in the environmental report, clarity in the parking issues through a more detailed plan of the car parking being shown on the application.

6 Finance
a) The budget monitoring statement was noted.
b) VAT report was noted.
c) Proposal to increase precept was discussed.
The discussion reflected the growing community, current rising costs, the increased costs of future services, and of improvement to services.
d) The motion to set the Precept at £43840, which represents an increase of approximately 5% per band D household, was carried by a majority vote.
Action-Clerk to send request to AVDC.
e) Community Fund-Cygnets. The meeting resolved to contribute £300 to Cygnets from the Community Fund for improvements to accessibility to the garden – subject to a successful grant application to Bucks CC and other fundraising.
Action – Clerk to inform Cygnets
d) Devolution Agreement Variation, covering some additional grass-cutting, was signed.
Action – Clerk to send.
e) Debit card for clerk. The Parish Council agreed to meet with TSB to discuss and if possible, arrange for a debit card for the Clerk.
Action for Clerk and two signatories to meet with TSB to fill in online form.

7 To draw cheques, ratify BACS payments and to check accounts
Payments and accounts were checked. 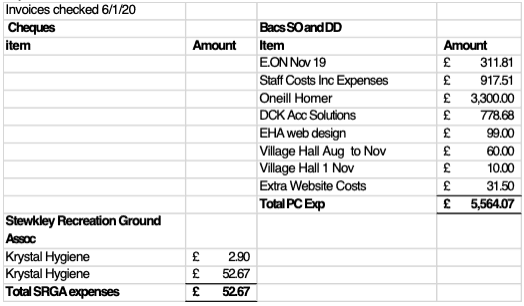 8 To discuss correspondence received since last meeting.
a) Red Brick Farm – no further information
b) Bucks Unitary – New Community Board grouping to replace current Local Area Forum: Stewkley included with Winslow and surrounding Parish Councils was noted. Concern was expressed that the potential issues surrounding Winslow’s future could dominate the new LAF.
c) Website analytics – the data was noted.
Action – Clerk to set up meeting with Cllrs Bottomley, Morgan and the website designer to discuss actions e.g. Keeping the website current and useful to residents,

9 Neighbourhood Plan: To receive an update from the steering group and agree any actions arising;
A report on the progress was noted.
SPC agreed to ’setting’ costs for Neighbourhood Plan document of up to £500.

10 Recreation Ground: To note any outstanding requirements and agree any actions;
SPC discussed the response from Ashlands re. adult exercise equipment installation and safety and decided to ask for further elucidation on:
Whether correct standards were met on installation.
If standards have subsequently changed what steps should be taken to reduce risk.
Action – Cllr Bottomley
A member of the public reported that the toilet in The Rec was still being used despite notices showing it is closed to the public.
Action- to be discussed at next meeting of SRGA.

11 Highways, Footways and Footpaths Lighting: Update and agree any actions arising.
a) Lighting – Flashing light 35 Dove Street has been reported for repair.
Western Power have been informed about supply failure to light by memorial.
A member of the public reported lights on the drive to Oak Dean Farm. This issue has been reported previously to both AVDC planning and AVDC enforcement.
Action – Clerk to reiterate concerns to AVDC.

b) Ivy Lane flooding – Cllr Higgins repeated the intention of TfB to clear the drain at the North end of Ivy Lane and to complete the road surface repair
c) High Street North Drainage – Cllr Higgins informed the meeting that the problems of flooding reported to the Council were the result of an adverse road camber which will be removed or patched in the programme of street repair at some point in the future.
d) Traffic Sub Committee report. – SPC approved expenditure of £185 for bin stickers for ‘20’s plenty for us’ campaign and up to £150 for banners. A promotional article is in preparation for February Grapevine for above campaign
Action – Cllr Higgins.
Cllr Morgan–to add promotional article to Facebook.
A member of the public noted that the Stewkley PC notice board by Grubbs Close had a broken leg.
Action- Cllr Bottomley to investigate and report.

Cllr Higgins reported that following discussions with Abbey Mill Homes he learned the footpath at the end of Cricketers Close may be reopened before April 2020.
Cllr Pryke reported a broken style to BCC.
A brief discussion took place on how to spread interest in becoming a Councillor prior to the elections in May 2020.
Preparations for forthcoming meetings were discussed:
PC meetings as follows:
3rd Feb 2020
2nd March 2020
6th April 2020
4th May 2020
1st June 2020