3. Declaration of interest in items on the agenda:
None declared.

4. To confirm the minutes: The minutes of the previous PC Meeting on Monday 3 December 2018 were confirmed after a modification of the date in the title and were then signed by Cllr Higgins as a true and accurate record of the meeting.
It was noted that the minutes for May 2018 were missing from the Website. Councillors were asked to look for a copy to give to the Clerk.

It was decided to put an article in GV to recommend that applicants attend the meetings when their applications would be discussed. The processes and format of the meetings to be explained in the article. Action: Cllr Higgins

6. To discuss correspondence and communication received since last meeting and decide on any action.
a) Red Brick Farm traffic monitoring. Cllr Higgins reported that the Interim Transport Strategy Manager supported further traffic monitoring to establish a baseline. Negotiation of SPC financial contribution and the type of monitoring is on-going. The follow up to this could help in the case for repair and resurfacing works.
It was noted that an unsatisfactory repair had been made by adding a lump of tarmac to iron works in Dunton Rd. This has been reported to ’Streetworks’.
b) 1 Dean Rd. 18/04130/APP. The planners at AVDC have not supported this application. Cllr Pryke commented that the reasons for decision seems to contradict general guidelines for the steepness of roofs in Bucks villages.
c) Scout Hut drainage.
Mrs Swann is emphatic that the drainage pipe should be removed from her land. A separate meeting with the Scouts to be arranged to discuss options.
d) Pub Lunch Club: this is now established with 26 villagers attending. Cllrs Bottomley & Morgan also attended. Cllr Smith to attend next month 6 Feb 19
e) Footpath by 66 High Street North is now moved. Action: Clerk to contact BCC regarding the meaning of the phrases in the conditions stated in the planning decision letter and to discuss the excess of signs and their removal.
f) Cemetery report: noted.
g) LAF meeting 6.30 10 June: noted.
h) BKV Champion. It was decided to put an article in GV to promote the idea of a person or group of people to act as BKV Champions. Action: Cllr Higgins.
i) Local Elections will not now take place until after the establishment of the new Unitary Authority after 1 April 2020.
j) Parish Unitary Liaison meeting dates sent out by email – noted. Cllr Morgan to attend 21st March 2019.

7. Neighbourhood Plan: To receive an update from the steering group and agree any actions arising.
No report.

8. Recreation Ground: To note any outstanding requirements and agree any actions;
CCTV to be discussed prior to next SRGA meeting. Scouts to be included re CCTV for new Scout Hut.
Action: Cllr Higgins to contact Scouts. Clerk to pass on ‘New Homes Bonus’ information to A Dunn and S Wass.

9. Highways, Footways and Footpaths Lighting:
The Clerk reported that the streetlight near the memorial has been repaired by Western Power. CU Phosco should be returning soon to repair the light on the Sycamore Close junction and to give the PC a quote for upgrading the bollard light in the Parsons Close walkway. The ditch on Soulbury Rd the end of Dove St has been reported again to Fix My Street.
Cllr Delafield pointed out that once again the verges in High St South were being destroyed by the companies installing broadband connections and by other users.
Action: Cllr Higgins to produce signs to ask people to keep vehicles off the newly reseeded verges. To be publicised in Spring and an explanatory note to be placed in the Grapevine.
Clerk to contact companies involved to repair the grass upon completing the work.
Two quotes have been obtained for killing and clearing the ivy from the lamp post opposite The Orchards on HSS. The company with the cheaper of the quotes was chosen to carry out the work. Action: Clerk.

10. Stewkley Wildlife Reserve:
Batteries for the camera were requested. Cllr Wodey informed the Council that Steve Knight, who had looked after the wildlife area camera and associated computer work, will be leaving Stewkley.
It was reported to SPC that vandalism had affected the lottery fund sign boards, display board and leaflet box.

11. Burial Ground: No expenditure or other actions.
It was noted that the notice board was repaired, and the rules and regulations have been added.
Cllrs Pragnell and Burgess presented a proposal for the extension of the burial ground with some costings for hawthorn hedging plants, fencing and fence posts. It may also be necessary to purchase a field gate.
Cllr Wodey pointed out that the burial section of the cemetery should have spaces for many years it might be used up quickly if people book plots in advance.
The Cemetery Groundsman who originated the plan had suggested that October could be a good time to begin the fencing work followed by the planting.

12. Finance:
a) The budget monitoring report was noted and brief discussion took place about the likely outturn resulting from completing such projects as traffic calming.
b) The Clerk pointed out that the decision made in the meeting of 3/12/18 to keep the precept at the same level needed further clarity. The PC unanimously decided to keep the headline figure at the same level as last year at £40,738. The implication of the decision is that there will be an increase of £1.15 per band D Council Tax per annum.
To draw cheques and ratify BACS payments – The following payments were agreed. 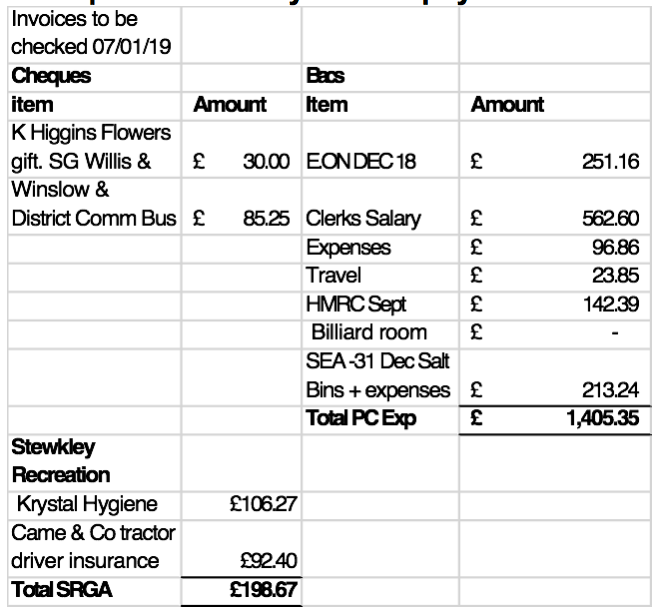 13. General Items: To report on meetings attended on behalf of the Parish Council and agree whether to add items to the next agenda.
Cllr Morgan asked for GDPR to be added to the next agenda.
Cllr Higgins asked for a pre-budget meeting to be arranged in February. Action: Clerk
The crime report from TVP was noted along with a suggestion to extend Neighbourhood Watch schemes. Action: Cllr Higgins to contact NW coordinator.
Cllr Wodey confirmed a second Bus Trial 12 Feb. Action: Cllr Wodey to advertise in GV.