2 Open Forum:
Discussions regarding the impact of Sunhill Farm Campsite on neighbouring farms took place.
Red Brick Farm traffic was also discussed. It was noted that breeches of conditions which cause harm should form part of a detailed record which should be made available to officers from ADVC.
Questions were asked and answered regarding the current effectiveness of the Planning Dept at ADVC.

3 Declaration of interest in items on the agenda: to declare any interests.
No interests were declared on agenda items.

4 To confirm the minutes of the previous PC Meeting on 4th November 2019.
The minutes were confirmed as a true record and were duly signed and dated by the Chair Cllr Higgins.

5 Planning: To discuss planning applications and make recommendation.
a) Single storey side and rear extension
173 High Street North Stewkley.19/04113/APP | Expiry: Tue 17 Dec 2019.
SPC resolved to object subject to further discussions with the applicant.
b) Oak Dean Farm 19/00132/APP update.
Cllr Higgins gave an update on the current status of this application. The determination date has been extended; the Council has previously submitted an objection. If the application moves to a committee stage a representative of SPC will speak.
c) 19/00076/NONDET – Land Adjacent Dunton Road Stewkley Buckinghamshire.
SPC noted the non-determination of the application.
d) Change of use of land from agricultural to campsite (retrospective)
Sunhill Farm Dunton Road Stewkley Buckinghamshire LU7 0LT
19/04187/APP Expiry 24 Dec 2019.
SPC unanimously agreed to object to this application. The application was felt to be inadequate in several areas.

6 Finance
a) Budget Monitoring. The budget monitoring was noted.
b) VAT Situations.
A document prepared by the Clerk was noted. This topic was discussed in preparation for a meeting with DCK Accounting Solutions to be held 6/12/19. Cllrs Higgins, Burgess, Delafield, Wodey and Clerk R Mann to attend.
c) Budget risks.
Budget risks were outlined in a risk assessment document and were noted.
d) Budget approval: the budget for 2020 to 2023 was approved.
e) Precept: The level of the precept for 2020/21 was discussed. Cllrs are to consider a small increase in the precept to cover increased Council responsibilities, costs and inflationary pressures. Precept to be set at January meeting.
f) An honorarium was agreed for the maintenance of the site of the war memorial.
Action: follow up by Clerk.
Community Fund.
Two applications were discussed:
Action Clerk: to check the rules on donations to Cygnets and other similar organisations.
Action Cllrs: to examine and to score the application for football goals and send scores to Clerk. 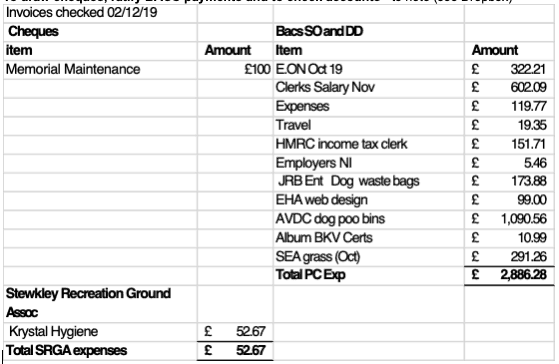 8 To discuss correspondence received since last meeting.
a) Use of Facebook and Website for postings.
Action: working group (Cllrs Bottomley, Morgan and Clerk) to discuss and revert to next meeting with ideas.
Clerk to ask for analytic review of website use and to add agenda item to next meeting.
b) Meeting with Wing PC.
SPC noted the feedback from the meeting and discussed the high tariff on unmetered electricity.
Action: Clerk to follow up with inquiries to Wing PC Clerk.
c) PATP
The PC noted the booking of this event on Monday,24 August 2020.
Discussion followed on provision of refreshments for the event.
Action: Clerk to inform Cygnets of the booking.

9 Neighbourhood Plan: To receive an update from the steering group and agree any actions arising;
The NP has required modification of the number of sites to meet the conditions from AVDC.
Conversations have taken place between Cllr Higgins and the owners of sites that have been dropped from the NP.
Cllr Wodey expressed disappointment in the changes that AVDC required as no comment had been made when they were originally consulted.
The redrafted plan will be submitted to AVDC in December with final documents to be submitted by the end of January 2020.
The partially completed site assessment report will require further Consultant input at a £300 increase to the total cost of the consultancy. This will cover expenses for detailed map area calculations. This amount falls within the budgeted funds for this project.

10 Recreation Ground: To note any outstanding requirements and agree any actions;
Adult Play Equipment: Cllr Bottomley sent a report showing: “no progress” on this issue.

11 Highways, Footways and Footpaths Lighting: Update and agree any actions arising.
a) One light by the memorial still not functional. Reported to Western Power as a possible power supply failure.
b) Runway lights.
Action: Cllr Higgins to discuss possible siting of columns with landowner.
Action: Cllr Bottomley to discuss possibility of overhead lights with residents affected by light spillage.
c) Traffic sub-committee update, featuring the proposed trial of, “20’s Plenty campaign”, was noted and supported.

The give way sign light on the Soulbury Rd/High Street junction was reported as having failed.
Action: Clerk to report.
A request was made for a white line to be placed on the road outside the entrance to Parsons Walk.
Potholes on Ivy Lane were reported.
Action: Cllr Higgins to investigate both with TfB.
A request was made regarding the reopening date for the footpath in Cricketers Close.
Action: Cllr Higgins to contact Abbey Mills Homes regarding footpath reopening schedule.