1. Apologies
Apologies for absence: None

2. Open Forum: 8 members of the public attended the meeting.

SRGA gave a report on Rec Fest. It was a great success. Hundreds of people attended, the bar and food stalls made good profits. Over £5000 in profit was raised. This will add to the fund for two major projects: toilet rebuild, and new playground equipment.
SPC and GigaClear were thanked for providing funds for set up costs. Further funding has been raised from successful bids for grants and a substantial amount of the required funds has been obtained.
Cllr Higgins congratulated all in the long list of volunteers. Special thanks were given to the organiser Brian Chambers.
Representations were made by the owners of Potash Nursery regarding the application discussed in Item 5 b)

3. Declaration of interest in items on the agenda:
None declared.

4. To confirm the minutes:
The minutes of the previous PC Meeting on Monday, 1 July were confirmed as a true and accurate record.

5. Planning: To discuss planning applications and make recommendation.
a) First floor rear extension and loft conversion 98 High Street North, LU7 0EP.
19/02459/APP.
SPC resolved to object to this application on the basis of inadequate parking provision for a dwelling extended to 5 bedrooms.
b) Removal of Condition 5 of application 94/01825/APP – ‘The occupation of the dwelling shall be limited to a person solely or mainly working or last working, in the locality in agriculture or in forestry, or a widow or widower of such person, and to any resident dependents’
The Long House Potash Nursery, Mursley Road, Stewkley Buckinghamshire MK17 0JE
Ref. No: 19/02355/APP
SPC resolved to support application with conditions attached.
c) SPC resolved to request extensions for all planning applications for which the validation and expiry dates falls on dates between meetings.

6 Finance
a) Budget Monitoring. Clerk.
The budget monitoring was noted.
Cllr Morgan asked about the Community fund’s balance. £1626.40 has been donated from an original allocation of £3000.
Action: Cllr Morgan to advertise availability of further funding for community projects.
b) SPC resolved to seek advice on VAT.
Action: Clerk to ask for estimates for discussion with DCK Beevers Accounting Solutions 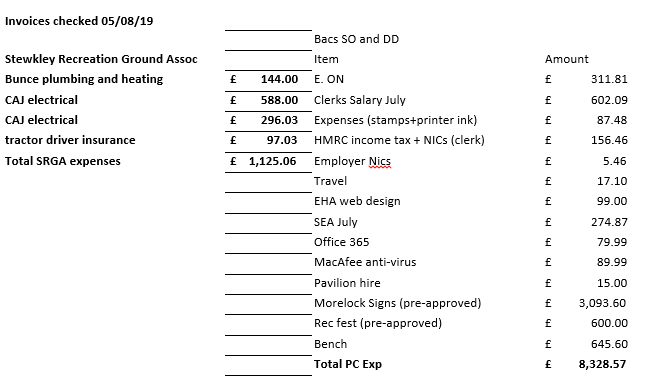 8. To discuss matters arising and correspondence received since last meeting
a) RBF/community liaison
Recent comments from the public regarding procedures not being followed have been passed to Mitchell Pugh (BCC enforcement Officer
b) BKV
Cllr Higgins congratulated the recent village success in winning the De Fraine Cup. He called it “a huge team effort”.
The presentation of the cup will take place at The War Memorial, Saturday, 14th Sept at 10.40. Cllr Bottomley was chosen by the PC to receive the cup.
Residents are all invited to attend the presentation ceremony and to join the PC at the Pavilion immediately afterwards for refreshments. The PC to fund the refreshments to an amount to be determined at September meeting.
Action: Cllr Higgins to seek a location to display certificates past and present.

9 Neighbourhood Plan: To receive an update from the steering group and agree any actions arising;
Cllr Higgins thanked all involved in overseeing the ample 32 hours of Consultation Meetings which attracted 35 villagers.
The online consultation introduced over 400 Stewkley Parish Council Website. It was also noted that 50 users had visited the audio page.
Cllr Morgan explained the current position with the Neighbourhood Plan consultation comments including those from AVDC, BCC and Natural England. All comments are uploaded in the Cllrs Dropbox (see Agenda and Papers August 19)
Action: All Cllrs:
• To read the comments from the consultation process by 9th August and;
• to indicate level of support for an independent voice from Neil Homer (grant finance may be available) and;
• To suggest help with collating the results.
Action: Neil Dickens, Janette Eustace to ask Paul Jobson for his comments on the consultation comments.
Action: Cllr Morgan to approach Neil Homer and see if he is willing to work with SPC Paul Jobson for his comments on site policies.
• SPC to arrange meeting with NPSG
• NPSG (and SPC) to arrange a visit with AVDC

11. Highways, Footways and Footpaths Lighting: Update and agree any actions arising;
a) Vaht withdrawal from grass cutting. Action: Cllr Bottomley to establish areas and costs with SEA.
b) Lighting maintenance contract ends Sept 2020. Cllrs Bottomley, Delafield and Higgins to form a working group to look at future planning.
Action: Clerk to check with other Parish Councils to establish their next steps. Possibly to form a joint contract for future maintenance. Clerk reported difficulty in obtaining further quotes for replacement bollard lights.
Action: Cllr Wodey to ask for advice from MK Council contact.
MVAS report circulated to all Cllrs. To note.

13. Burial Ground: To discuss and authorise expenditure incurred or actions required
No actions.

14. General Items: To report on meetings attended on behalf of the Parish Council and agree whether to add items to the next agenda.
SPC resolved to buy 2 new 50l green bins to replace broken bins at the top of Tythe Close and the bus stop in High Street North.
Action: Clerk to place order.
Linxman needs a place to keep rubbish collected from work.
Action: All Cllrs to investigate and consider locations for a 1 Tonne bag to be left for collection. Ideas to Cllr Bottomley.
Cllr Burgess suggested that the PC needs a place to lock up its resources. Some discussion took place.