2) Open Forum:
PCSO Dean: re van thefts, cross border police work had led to arrests.
Anti-social behaviour: a suspect had been identified and actions taken. Vale of Aylesbury Housing Trust also aware.
PCSO agreed to put notices on the cars on HSS near Dunton Rd junction to point out that the parking whilst not illegal was inconsiderate. Mud on Dunton Rd is an issue for Transport for Bucks to clear up and charge the cost to those responsible.
PCSO Dean is planning a ‘Have your say’ meeting in Stewkley. It was suggested that early advice of dates would help with publicity in the Grapevine.
Cllr Blake highlighted Bletchley Road closures 10-15 April for work by Western Power.

4) To confirm the minutes: The minutes of the previous PC Meeting on Monday, 1 April 2019 were confirmed as a true record and were signed and dated by Cllr Higgins.

6) To discuss correspondence and communication received since last meeting and decide on any action.
a) Land opposite No2 Ivy Lane. Appeal to Secretary of State. SPC response sent to Sec of State. SPC noted the response from AVDC which had defended its case strongly.
b) Revised Standing Orders – no update available
c) Dunton Rd Traffic: Cllr Higgins commented on a recent traffic count which should deliver data by 5/4/19.
The Clerk’s invitation email to RBF to form a liaison group with SPC has received no response. Action: Mitchel Pugh to be contacted by Cllr Blake to advance the liaison group idea.
d) GDPR – no update
e) Organisation of the APM: Various ideas discussed with the aim to encourage greater public participation.
3 items agreed: to have refreshments; shorter speeches; presentation of new audio tour
Action:

8) Recreation Ground: No comments made.

9) Highways, Footways and Footpaths Lighting:
No progress with the Runway bollard lights or ivy on street lamp. Action: Clerk Alternative options to be sought.

10) Stewkley Wildlife Reserve: To discuss and authorise expenditure incurred or actions required;
SPC agreed: the repair of the vandalised notice board; and the purchase of seed and plants for the wildlife area. Videos from the wildlife area have been transferred to the new hard drive and the camera is currently recording Spring wildlife.

11) Burial Ground: To discuss and authorise expenditure incurred or actions required.
SPC agreed to expenditure on rose fertilizer and treatment for black spot on the roses.
Action: Clerk to commission survey of soil and groundwater for burial ground extension.

12) Finance
a) Budget Monitoring. The most recent Budget Monitoring Sheet was noted.
b) SPC approved the budget plan for 2019-20
It was agreed that in future the budget approval would be discussed in October and approved and signed off by November.
Cllr Smith inquired about the submission of FPO payments. The payments are noted by 2 Cllrs each month. The Clerk submits the payments electronically using the TSB software.

13) To draw cheques and ratify BACS payments:
The following payments were read out and explained: 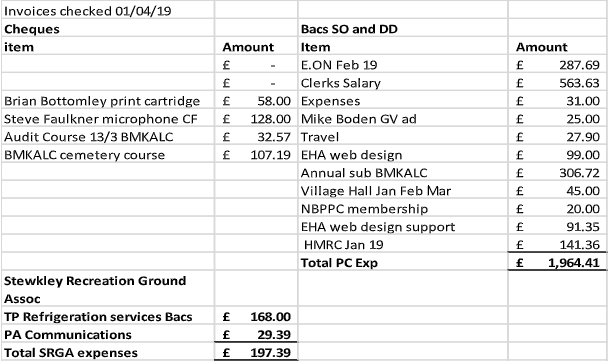 14) General Items: To report on meetings attended on behalf of the Parish Council and agree whether to add items to the next agenda;

Cllr Bottomley reported that the Pub Lunch scheme continued to be well attended.
Cllr Higgins announced that George Harper has decided to retire as Speed watch Coordinator after 7 years. A successor will be sought. The PC noted its appreciation of his efforts.
Cllr Higgins & the Clerk attended an AVDC introduction to a new planning portal.
Cllrs Smith and Higgins attended the BMKALC Parish Liaison meeting. Minutes circulated.